Come see the the official poster and trailer of Pantelion Films’ romantic comedy Everybody Loves Somebody. The film opens in theaters on February 17. The cast includes Karla Souza (How To Get Away With Murder), Jose María Yazpik, Ben O’Toole, Alejandro Camacho, and Patricia Bernal.

In addition to its release in U.S. theaters, the film’s world premiere will take place on January 7 at the Palm Springs International Film Festival. 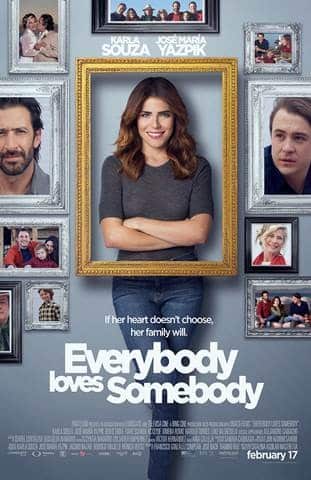 Everybody Loves Somebody (Pantelion Films/February 17, 2017)
On the surface, the young and beautiful Clara Barron (Karla Souza) seems to have everything- a great job as an OB-GYN; a great house in LA; and a big fun-loving Mexican family.  But, the one thing Clara doesn’t have figured out is her love life.  Pressured by a family wedding in Mexico, Clara asks a co-worker to pose as her boyfriend for the weekend festivities – only to be caught by surprise when her ex-boyfriend (and family favorite) suddenly shows up after disappearing from her life completely.  Torn, Clara must decide between going back to the past or open her heart to new and unexpected possibilities.  In an adventure full of laughter, she learns that sometimes it takes the whole crazy family to help you find crazy love.