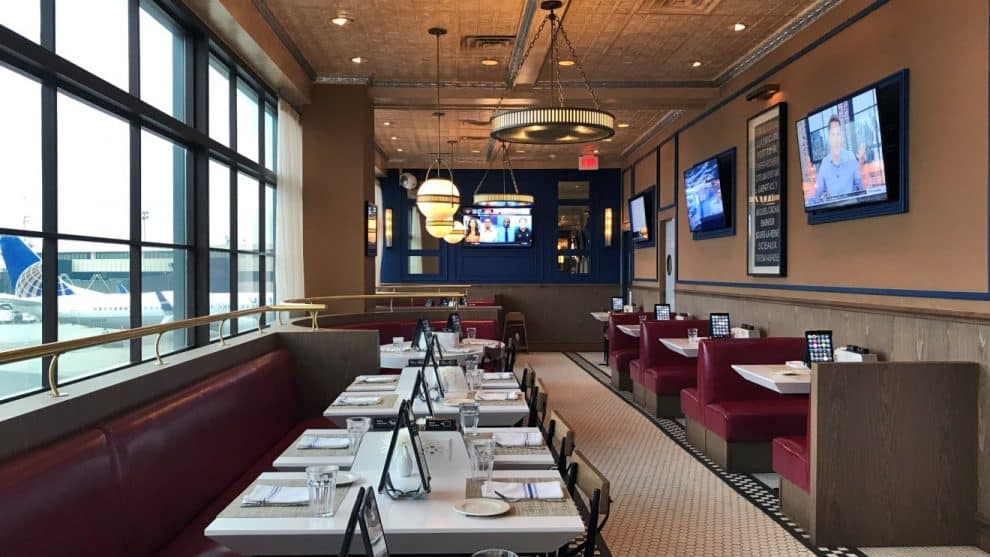 “Shh…it’s Classified,” the email was titled. Part of the text read, “The creators of Classified have created a bright and airy dining space that’s hidden away for those lucky enough to get an invitation.”

This coveted invite doesn’t equal a free meal: dining at the “secret” restaurant can easily run upward of $100 for two people, and that’s without alcohol.

Is the hype justified?

I had lunch at Classified last week, and although my experience wasn’t completely objective (I wasn’t able to dine there anonymously due to security constraints), I will say that dishes I tried were tasty and the space was a design delight. Situated in Terminal C after security, the 36-seat restaurant opened on Aug. 24 and serves farm-to-table fare. The acclaimed New York City chef Marc Forgione, who has an eponymous restaurant in downtown Manhattan, had a hand in creating the menu, and the well-regarded New York City-based architect David Rockwell is behind the design.

Since I didn’t have a plane ticket, Mr. Brinker had to escort me to Classified and stay near me throughout because according to Transportation Security Administration rules, the escort and the escorted always have to be within earshot and visibility of each other. My other companion was my father, Vikesh, who has 1K status with United, meaning he flies at least 100,000 miles a year with the airline; in fact, he was among the group that actually received a Classified invite.

United is staying mum on which fliers get asked to dine. Maggie Schmerin, a spokeswoman for the airline, said, “It is invitation only, exclusively for United customers.” While my dad got the ask, other United frequent fliers reportedly did not, including Zach Honig, the editor in chief of the online travel site the Points Guy.

I may not be able to shed light on how invitees are determined, but I can divulge Classified’s “secret” location: the restaurant is tucked down a hallway behind the French bistro Saison. Fliers with a reservation are met at Saison’s entrance by an OTG employee and escorted to the sleek and airy room, which overlooks United planes waiting at the gates and has dark oak floors, navy leather banquettes and clusters of overhanging gold lamps.

Classified is open from breakfast through dinner and will serve brunch on weekends starting in October. It has an extensive wine and spirits list with many high-end choices such as a 30-year-aged scotch from the Macallan, which runs $125 for an ounce-and-a-half pour.

Michael Coury, the executive chef for OTG, oversees the cuisine and said that the menu will change seasonally and even weekly, with a large part of the produce coming from Union Square Greenmarket, in New York City. “The staff of cooks visits the market at least three times a week,” he said.

My father and I ordered our food from the iPads affixed at every seat, and the few dishes we ate reflected late summer’s bounty, like the amuse-bouche of asparagus gazpacho and the colorful baby lettuce salad with shaved asparagus, carrots and watermelon radishes. We also enjoyed a chilled lobster dish, which had meaty chunks of lobster and thin fennel slices tossed in a flavorful grapefruit dressing and the seared tuna with sautéed artichokes, chanterelle mushrooms and preserved lemon.

We tried only a handful of the dishes, but the menu also includes several iterations of eggs at breakfast, more than a half-dozen sandwiches at lunch and at both lunch and dinner, a raw bar and a variety steaks cooked on a wood-burning grill.

Overall, the food and the setting — along with the price of the meal — matched that of any upscale, contemporary restaurant in New York.

Classified may be limited to a handful of United customers, but every flier with the airline will be able to try OTG’s next restaurant at Terminal C, Tsukiji Fish Room. Named after Tokyo’s famous Tsukiji Market, the grab-and-go spot is opening sometime in October and will sell sashimi and sushi using fish from the namesake market. The seafood will be flown into the airport from Tokyo several times a week on — what else?— a United plane.