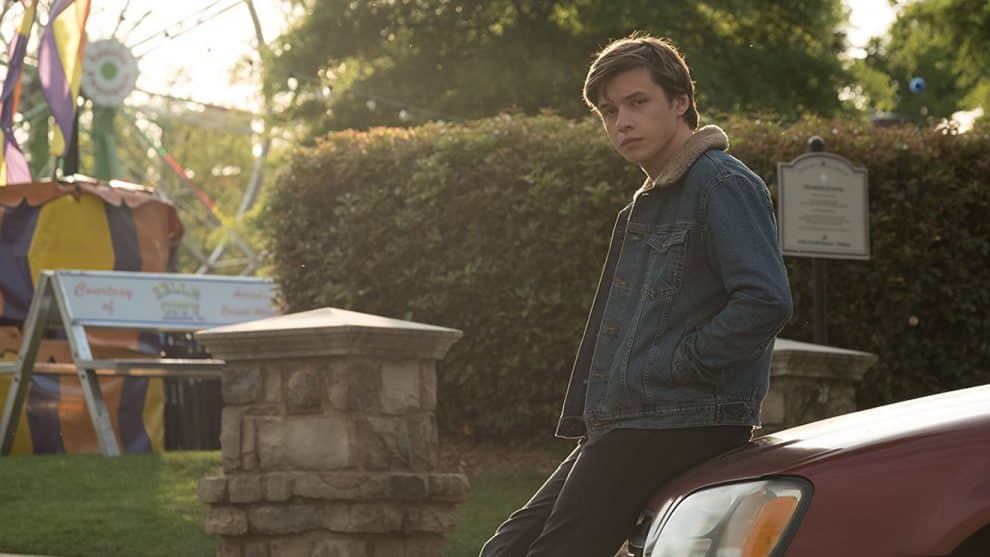 The Greg Berlanti directed film, based on the novel Simon vs. the Homo Sapiens Agenda, stars Nick Robinson as the titular character, a closeted high schooler struggling to find a way to live as his authentic self. He also has to deal with a blackmailer threatening to out him to his entire school, while attempting to discover the identity of an anonymous admirer.

It is the kind of queer representation that, as Robinson recently told GLAAD, who have been firmly in support of the film, feels needed now more than ever.

“One of the things that I kept circling back to when I was trying to decide whether or not to do it was just the potential of this movie,” he said. “It had a really positive message to be putting out into the world, especially now, and it felt like it was just a great moment where we could kind of have our cake and eat it too. We could be able to make this broad, mainstream movie, but that was funny and sweet, but it had a message, and a genuine heart and had something to say, which was exciting to me.”

Actor Alexandra Shipp, who also stars in the movie, has said she believes this film can save lives, especially for those living in more isolated places.

“There are a lot of people out there who don’t have that community, who live in small towns, who could possibly be the only gay person they’ve ever met and they don’t even know what that means for themselves, and that sense of feeling alone. And when you see a movie like this you realize that you’re not alone, that you’re not weird or totally out of the norm. You’re actually normal and worthy of happiness, and worthy of love, and are worthy of being on this planet,” she said.

Even those who have cultural influence, and have a community, can be subject to harassment. Openly gay Olympic skier Gus Kenworthy, who is also encouraging people to see Love, Simon, demonstrated that recently by sharing some of the horrific comments he has received on his YouTube videos.

The film has already helped inspired some involved in the film to come out: Actors Keiynan Lonsdale and Joey Pollari.

Pollari, who plays a possible love interest for Simon, just came out publicly as gay in an interview with The Advocate, and said he came out to his friends and family at 18.

“The only part that was difficult was me coming out to myself. And I think that is the most difficult coming-out,” the 23-year-old said. “I think all my friends and family knew on some level. I think maybe two people were shocked.”

He explained that it wasn’t easy for him to come out at first, due to the stigma in the broader culture around him.

“A lot of the trouble was self-shame. I do believe a system of power, of patriarchy, of masculinity did impact me,” he said. “The greatest difficulty I found was that it didn’t match my idea of myself. It seemed incongruent with the future I imagined for myself, the identity I had struck up with others.”

Lonsdale, 26, came out as bisexual on Instagram while filming Love, Simon.

“I guess it’s kind of a full circle thing for me,” he told GLAAD of appearing in the film.

He said he grew up feeling as if he “didn’t really exist,” because of the lack of representation in media.

“It just wasn’t there…(and) it definitely wasn’t being embraced and celebrated like we do with this movie. So I convinced myself that I would never be able to be living my dreams if I was my authentic self, like I had to choose. And then, here I am, living a dream. Not just a part of this industry, but a part of a project that all of us are really proud to be in,” he added.

“You watch something, and depending on how the story is told and how these characters feel to you, it influences your life, it influences how you feel about yourself and people that you meet,” he told The Hollywood Reporter.

“The amount of people in the world who identify as LGBTQ or are questioning themselves, it’s a lot of the population of the world, so this speaks to the world,” he continued. “And even if you don’t identify in that way, you know someone that does, or you have someone in your life — even if you don’t know they do —that might be struggling with that. It’s something that affects who we are as human beings.”

Speaking of, Robinson’s brother came out during the filming of Love, Simon. And while he told Ellen DeGeneres he thinks the timing was coincidental, he added, “but one of the best things that came out of this movie was being able to talk to him.”

And now he, like so many other young questioning kids, will have this movie, and those likely to follow in its footsteps.

It might feel that in the Trump era we are sliding back, and in some respects, certainly we are, but the fact that a film like Love, Simon can get made and find its way into theaters all across the country shows culture is willing to step up where politics may fail. And it is in a world where this film can see a wide release that the next generation of leaders, many of whom showed their seriousness of purpose during the national walkout to protest gun violence, are coming up.

A film like Love, Simon is so powerful to so many because it not only demonstrates that social progress is possible, it shows it is inevitable, no matter how dark it may sometimes seem.

Romanian Court Rules Constantin Reliu As Dead, Despite The Man Himself Claiming Otherwise
THE STRANGERS: PREY AT NIGHT – How the Soundtrack Brought Terror to Life!