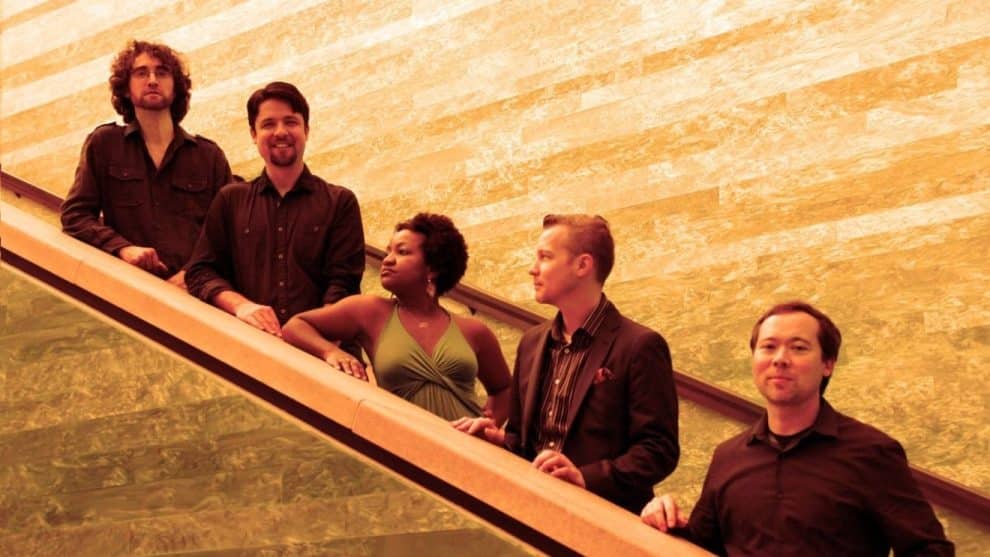 The First Vinyl Release from the Band!
Pre-Order: https://nori.bandcamp.com/album/nori-record-vinyl

(Austin, TX) — Nori, the genre-bending Neo Jazz band has curated a collection of their favorite songs on their upcoming album. The self-titled release, NORI, showcases their diverse sound and pointed lyrics on the 10-song deep record due out December 3rd. The new album will be available on vinyl with two new singles to be released to streaming platforms along with the songs from previous albums. Pre-order here: https://nori.bandcamp.com/album/nori-record-vinyl

Nori is an Austin, TX based quintet and has been hailed “a five-person gift from Austin, TX” by Festival Peak. The band is comprised of talented professional musicians including Akina Adderley on vocals; Erik Telford on trumpet and alto horn; Nick Litterski on Fender Rhodes, piano, and prepared piano; Aaron Allen on acoustic bass; and Andy Beaudoin on drums and percussion. Together their music is aesthetically and deeply rooted in both American jazz and folk music traditions. The ensemble playfully weaves together a myriad of global influences with current and topical social commentary giving rise to a seamless synthesis of sound that is Nori.

The new album transcends time with a collection of songs written from 2015 – 2021, but yet addresses important topical themes of identity, activism, racial tensions and racism, and love. The band curated the collection from their catalog along with some new material. Included are six songs from their first two albums World Anew and Bruise Blood and also “Tumbao,” a single released in 2017, along with the newly released single “I See You” out this past December. They also masterfully composed a new rendition of Nina Simone’s “Four Women.” The aptly self-titled new release is steeped in observations and personal plight and gracefully highlights the balance of story-telling traditions with wide-open improvisations that echo the transcendent tones of Nina Simone, Bill Frisell, John Coltrane, and Joni Mitchell.

The album opens with a stunning and somber song “The Garden.” The lyrics were written by Akina and are a powerful metaphor for the life cycle of a black child. The song follows as he grows in the womb and transitions into the loving and nurturing arms of his mother – only to have life tragically cut short at the hands of a racist brute. The pointed new arrangement features special guests, the wonderful string trio, Leigh Wallenhaupt on violin, Leah Nelson on viola, and Rylie Harrod-Corral on cello. Another powerful standout is a cover of Nina Simone’s song “Four Women.” Nori says, “Nina Simone has been our guiding inspiration since the conception of the band. She’s an eclectic musician. She’s a master storyteller, and she’s a fierce activist. These are all things Nori aspires to be. We have been incorporating this song in our live set for a number of years and wanted to record it as a way to provide an exclamation mark at the end of the album!” This song is a dedication to Nina Simone.

All the songs on the album were recorded by John Michael Landon at their home base studio, Estuary Recording in Austin. Dave Darlington at Bass Hit Studio (New York, NY) mixed most of the songs with additional mixing by Erik Telford (“The Garden,” “I See You,” and “Four Women”). The new album was mastered for vinyl by Erik Telford.

NORI will be released exclusively and for the first time on vinyl! Reflecting back on the new project, the band comments, “This is our first vinyl release. We wanted to create a document of our young history and make it available for physical release. In many ways, we consider ourselves “old souls,” so vinyl is the perfect format for the occasion.” It is due out on December 3rd. Pre-order here: https://nori.bandcamp.com/album/nori-record-vinyl

SURVIVE THE GAME – DVD Online Giveaway
Surprise! The Cast of Amazon Prime Video’s New Series I Know What You Did Last Summer Received a Visit From the Original Cast