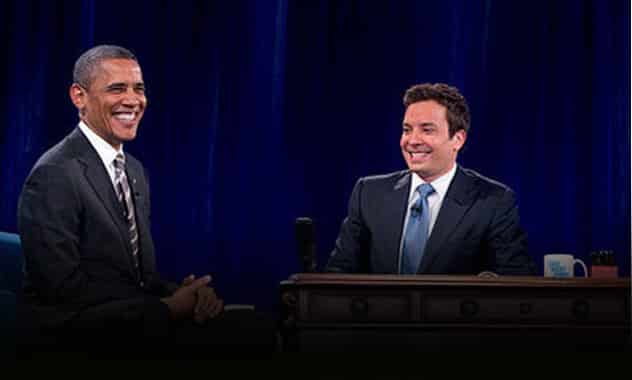 On Wednesday night, President Barack Obama did what no president has done before: He slow jammed the news with Jimmy Fallon and The Roots on “Late Night.”

Stepping in for regular news jammer Brian Williams, Obama slow jammed one of his policy positions over the smooth vamping of house band The Roots.

“I’m President Barack Obama, and I, too, would like to Slow Jam the News,” said Obama before taking his place on a stool and laying out his agenda.

“What we said is simple: Now is not the time to make school more expensive for our young people,” Obama said to wild applause from the college crowd at the University of North Carolina Chapel Hill.

Fallon then stepped in to offer some slow jam support. “You should listen to the President,” he crooned. “Or as I like to call him, the Preezy of the United Steezy.” Watch as Obama tries to stifle his laughter in the background.

If Obama had not chosen to spend his life in politics, perhaps he could have chosen a career in the R&B arts. Later in the show, Fallon showed his audience a photo of a college-age Barry Obama resembling a lost Jackson brother, sporting an Afro and clad in a jacket from Goodwill. Clearly, the President can no longer deny his inner Al Green.