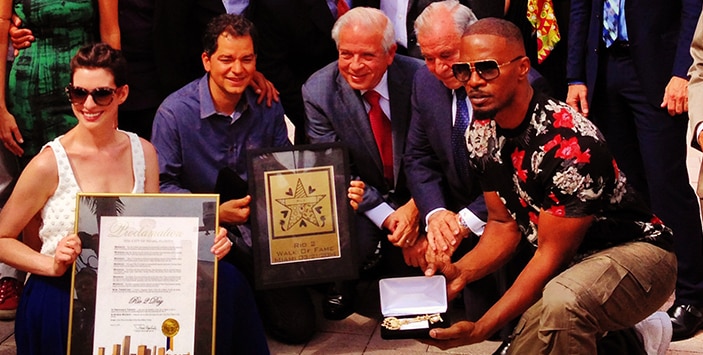 The groundbreaking ceremony for the Official Miami Walk of Fame was held on March 21, 2014

The Official Miami Walk of Fame, Inc. immortalizes the entertainment industry’s biggest names, many whom are hometown celebrities in entertainment, film, television, theater, sports, music and beyond. Inductees are chosen by a selection committee of industry peers, and honored with an induction ceremony.

The inaugural star-studded public ceremony took place with the premiere induction of the animated film “RIO 2,” as well as the induction of two of its stars – Academy® Award and Grammy® Award-Winner, Jamie Foxx, and Miamian Andy Garcia.

Both recipients also received keys to the City of Miami as well as City of Miami Ambassador of Art, Entertainment and Culture Awards from Mayor Tony Regalado. Additional cast members Anne Hathaway, George Lopez, Jemaine Clement, Kristin Chenoweth, Rodrigo Santoro, and director Carlos Saldanha, were also at the ceremony to support their co-stars and accept the star for their film.

The free, family-friendly public ceremony also celebrated Brazilian culture with a live appearance of Rio 2 characters “Nico” and “Pedro.” Additionally, the Miami Children’s Chorus performed the movie’s theme song, “What is Love”, accompanied by Paulo Gualano’s Brazilian and Latin Music Company Samba drummers and dancers.  Audiences were also treated to a display of colorful birds of the Amazon presented by Jungle Island and a proclamation from the Brazilian Consulate will be given to Bayside Marketplace for promoting tourism and business exchange with Brazil.

“We are thrilled the Miami Walk of Fame’s first honorees are Rio 2 and two of its extraordinarily talented superstars, Miami’s own Andy Garcia and honorary resident Jamie Foxx,” says William D. Talbert, III, CDME, President & CEO of the Greater Miami Convention & Visitors Bureau. “The exciting cultural vibrancy portrayed in Rio 2 mirrors the welcoming multi-cultural fabric and flavor of Miami, which is a top attraction for our visitors of all ages from around the globe. Brazil is Miami’s #1 international market and with Miami International Airport offering more flights to and from more cities in Brazil than any destination in the U.S., we look forward to welcoming even more Brazilian visitors to our vibrant world-class community.”

The Official Miami Walk of Fame, Inc. launched a new Downtown Miami world-class cultural tourism attraction, along its arts, sports and entertainment corridor on Biscayne Boulevard. It is located at Bayside Marketplace, which is known as one of South Florida’s prime hospitality and tourism destinations and a vital economic growth engine for Miami.

The Official Miami Walk of Fame at Bayside Marketplace is a “must-see” tourist destination fashioned after the Hollywood Walk of Fame sidewalk established in 1960. It promotes arts and entertainment in greater Miami through development, promotion, and philanthropy. The Official Miami Walk of Fame also supports other local initiatives such as “The Magic City” a branding of The City of Miami, the Greater Miami Convention and Visitor’s Bureau, and the Miami Downtown Development Authority.

Worldwide, Miami is one of the largest production and distribution centers for the film, television, commercial advertising, still photo, music and new media industries. The industry’s combined economic impact in the local economy is about two billion dollars annually, with $100 to $150 million coming from more than 1,000 filming location shoots each year. There are approximately 3,000 local companies working in film and entertainment.

The official star was designed by Romero Britto, Brazilian Neo-pop artist, painter and sculptor, who has lived in Miami, Florida since 1989 and has completed works for Movado, Disney, Enrico Coveri, Pepsi, the United Nations, BMW and Royal Caribbean Cruises.   The stars were embedded in the sidewalk flagpole entrance of Bayside Marketplace. Each star was hand-crafted by Creative Terrazzo Systems, Inc. of Miami, FL, the premier Terrazzo flooring company in the region; fabricators of the beautiful new floors at the Miami International Airport.

“I am both proud and honored to welcome the Official Miami Walk of Fame to Bayside Marketplace.  We are huge fans of our beautiful City and acknowledge the value of tourism and our entire hospitality ambiance that transcends excitement and entertainment as one of the greatest cities in the world!  On behalf of General Growth Properties and Bayside Marketplace we salute this Premiere inauguration, Artist Britto and are thrilled to welcome Rio2 and the star studded cast” – Pamela Weller, Senior General Manager Bayside Marketplace

Each inductee received a small duplicate of the star and recognition from the Florida Film Commission for contributions to the industry in Miami and the State of Florida.