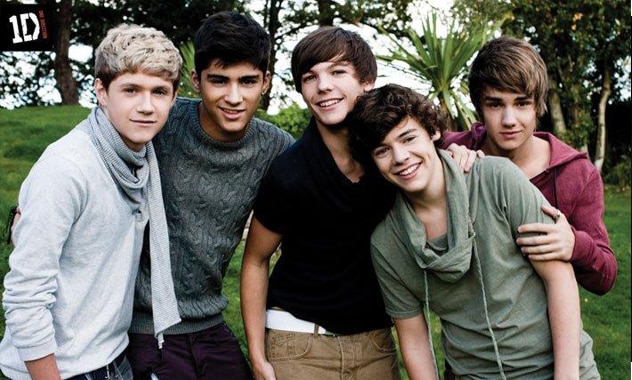 One Direction wants to set one thing straight: Unlike the boy bands of yesteryear (RIP *NSYNC), they don’t dance. Maybe there’s an occasional fist pump thrown or a hop here and there, but these boys just can’t move.

Other than that, however, they don’t mind the boy band label. “That is what we are, we’re a boy band,” said Louis Tomlinson during the band’s “Today” interview. “We don’t necessarily follow the past stereotypes of the past boy bands.”

Those stereotypes, of course, include dancing. “No dancing,” Tomlinson said. “At a disco sometimes,” continued bandmate Liam Payne, before heartthrob (there’s always one!) Harry Styles demonstrated his signature move: “The Sprinkler.”

Are clubs still being called discos in the U.K.? Or do these boys just really like to boogie? Regardless, it looks like we can all expect “The Sprinkler” to make a resurgence at homecoming dances across the country.

The group also voted on the most romantic member of the group, and they all agreed it was Payne. However, along with bandmate Zayn Malick and Tomlinson, he has a girlfriend. Sorry ladies!

Watch the full clip below.