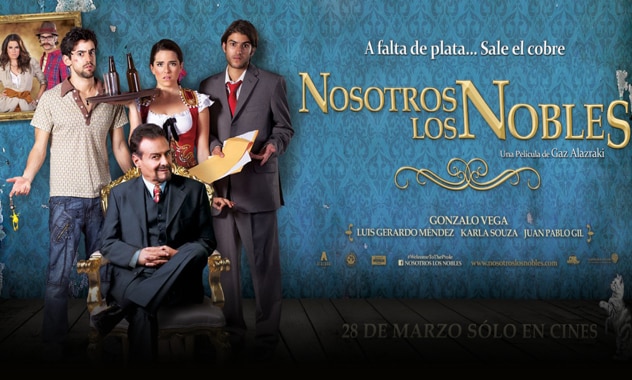 Cinelatino, the nation’s leading Spanish-language movie channel, announced it will release “Nosotros Los Nobles” (We are the Nobles), one of Mexico’s highest-grossing films of all time, in select AMC theaters across the United States on Friday, November 1, 2013. This deal marks the first time the cable network will release a film theatrically.

“Nosotros Los Nobles” took Mexico by storm when it launched in March of this year, quickly becoming the most successful film in the country’s history at the time of its release, surpassing the previous box office record set by the 2002 megahit “El Crimen del Padre Amaro” starring Gael Garcia Bernal. The film out-grossed some of the year’s biggest Hollywood releases, including Man of Steel, Oz The Great and Powerful, World War Z, The Wolverine, Pacific Rim, and G.I. Joe: Retaliation, among other Hollywood box office blockbusters.

The movie centers on three spoiled ‘juniors’—the term used in Mexico to describe the rich children of the country’s elite class—who get cut off from their family fortune and are forced to work for the first time, creating hilarious and awkward situations as they adjust to the real world.

“One of the reasons the film has been so successful is because it feels like a Hollywood comedy, but in Spanish,” said Gaz Alazraki, the film’s director. “There haven’t been many Mexican comedies with happy endings in our recent history, and the audience has a definite thirst for a family comedy free of nudity, violence, drug cartels, experimental narratives, or tragic endings.”

The class-disparity issue also touched a chord with Mexican audiences, not just among the working class but across both ends of the audience spectrum.

“Nosotros Los Nobles’ is both a feel-good family comedy and a social satire that mocks the class differences in Mexico, which is one of our defining characteristics as a nation. The poor can laugh at the rich, and the rich can laugh at themselves,” added Alazraki.

“This kind of film hadn’t come around in more than a decade and we knew we had to acquire it,” said James M. McNamara, Chairman of Cinelatino. “This film has all the right elements for a theatrical release: a highly-entertaining storyline, excellent acting, high-quality production, and a good moral lesson. It is the kind of feel-good movie that audiences will love and we are confident it will perform as well in the U.S. as it did in Mexico.”

Prior to the release, the film will have a red-carpet premiere at the Los Angeles Latino Film Festival on October 14 at the Orpheum Theater in Downtown LA.