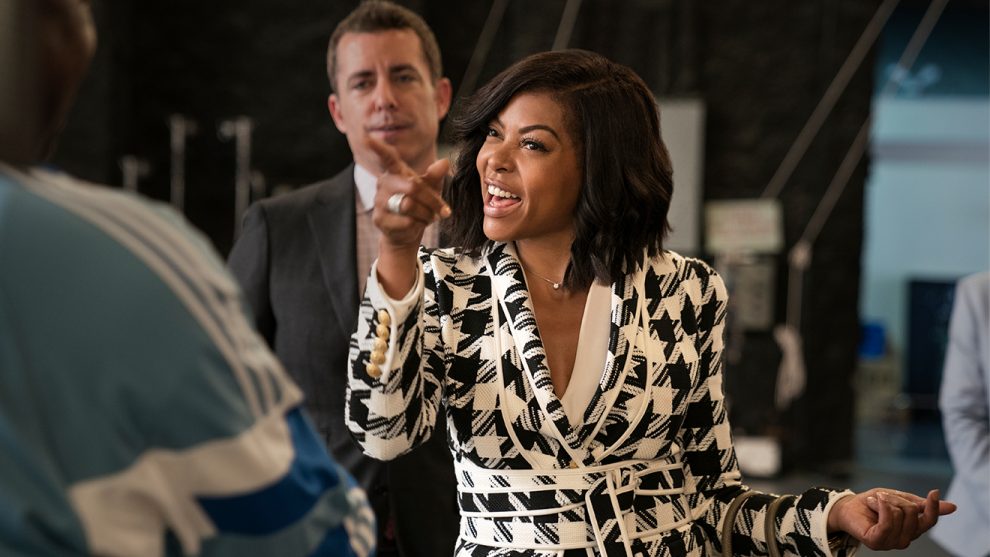 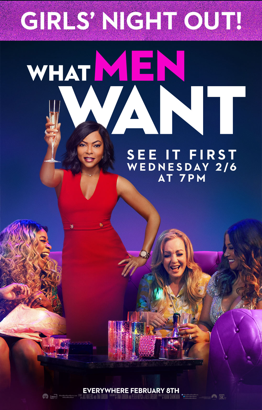 Fans will have the opportunity to see the film early for one day only, on Wednesday, February 6th at 7:00pm

HOLLYWOOD, CA (January 19, 2019) -Paramount Pictures announced today that on Wednesday, February 6th, fans at select theatres in the U.S. will have the chance to attend paid WHAT MEN WANT Girls’ Night Out Screenings.

Fans who participate in this one-day only event will get the chance to grab their friends for a fun night out and see the film on the big screen before it opens nationwide on Friday, February 8th. Tickets will be on sale for the prevailing price at participating locations, and each paid admission includes a ticket to the movie, bonus content and a free WHAT MEN WANT cocktail glass at all participating theatres – while supplies last. Some circuits will offer special concession deals, specialty beverages themed around the movie, and/or more.  Offers will vary from circuit to circuit and theatre to theatre.

Showtime will be 7:00PM at all participating locations, with 335 theatres participating in over 70 markets. Over 200 of the screenings to take place at theatres with bars and/or with beer/wine & frozen drink service.

Ali Davis (Taraji P. Henson) is a successful sports agent who’s constantly boxed out by her male colleagues. When Ali is passed up for a well-deserved promotion, she questions what else she needs to do to succeed in a man’s world… until she gains the ability to hear men’s thoughts! With her newfound power, Ali looks to outsmart her colleagues as she races to sign the next basketball superstar, but the lengths she has to go to will put her relationship with her best friends and a potential new love interest (Aldis Hodge) to the test. WHAT MEN WANT is the latest comedy from director Adam Shankman (HAIRSPRAY) and producers Will Packer and James Lopez (GIRLS TRIP), co-starring Tracy Morgan, Richard Roundtree, Wendi McLendon-Covey, Josh Brener, Tamala Jones, Phoebe Robinson, Max Greenfield, Jason Jones, Brian Bosworth, Chris Witaske and Erykah Badu. The story is by Jas Waters and Tina Gordon, with a screenplay by Tina Gordon and Peter Huyck & Alex Gregory.

Gillian Anderson To Play Former British Prime Minister Margaret Thatcher In ‘The Crown’ Season Four
Mariah Carey’s Ex-Assistant Claims She Got The R. Kelly Treatment And Other Abuses While Working For Her