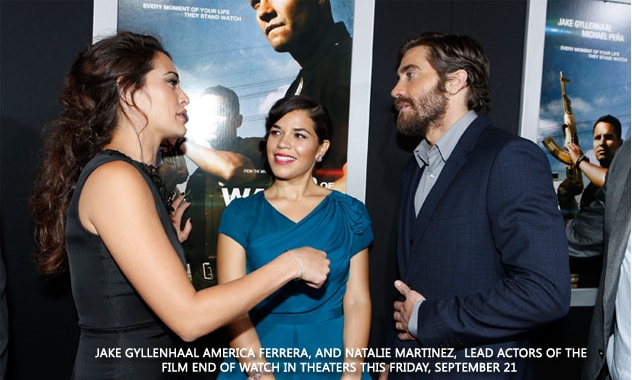 Last night’s premiere of End of Watch was held  in Los Angeles, a film which opens in theaters this Friday September 21. Directed and written by David Ayer (Training Day). In this celebration brought together the main actors of the film: Jake Gyllenhaal, Michael Peña, America Ferrera, Anna Kendrick and Natalie Martinez, like other celebrities among which were: Arnold Schwarzenegger, Efren Ramirez, Audrina Patridge to name few.

From the writer of Training Day, End of Watch is a fascinating action thriller that puts the audience in the midst of persecution as never seen before. Jake Gyllenhaal and Michael Peña play two young officers of the LAPD who discover a secret that will make them the target of one of the most dangerous drug cartels in the country.