We are delighted to share with you the poster for the upcoming all-star ensemble film BIG STONE GAP. Written and directed by Adriana Trigiani (The Shoemaker’s Wife), BIG STONE GAP is based on her best-selling novel of the same name.  Picturehouse will release the film nationwide on October 9, 2015. 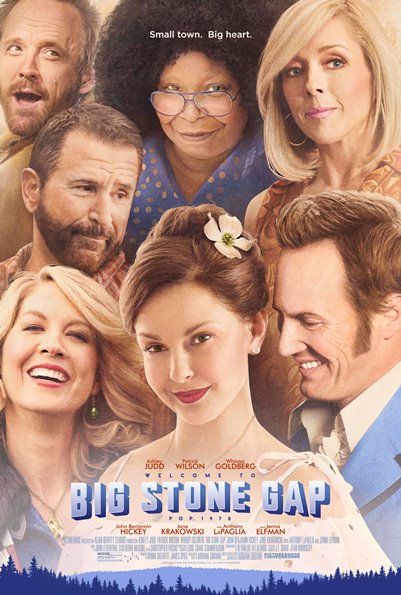 Adriana Trigiani, in her debut as screenwriter/director, brings her best-selling novel BIG STONE GAP to the movies. BIG STONE GAP, shot entirely on location in Trigiani’s hometown, is the story of proud working people and their lives in a coal mining town nestled in the southwest corner of Virginia, deep in the Appalachian Mountains. Ave Maria Mulligan (Ashley Judd), the town’s self-proclaimed spinster, has resigned herself to a quiet life of singlehood and being useful. She works in her family’s pharmacy, delivers the prescriptions herself, and directs the town’s annual outdoor drama until one day she learns of a long-buried family secret that changes the course of her life forever.