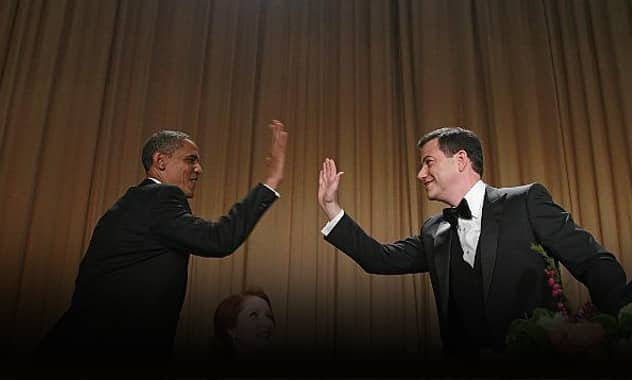 The Comedian-in-Chief is at it again. And Hollywood can’t get enough of  President Barack  Obama‘s comedy stylings.

The 2012 White House correspondents’ dinner was held Saturday evening in  Washington, DC., at the Washington Hilton Hotel, with 2,000 guests including  everyone from George Clooney, Lindsay Lohan, Kim  Kardashian, Anne Curry and Barbara Walters to of course  the Prez and a very chic looking First Lady Michelle  Obama.

Kardashian and momager Kris Jenner dined alongside a very  glam LiLo and her lawyer Shawn Holley. A Stacy  Kiebler-less Clooney, Paul  Rudd, Elizabeth Banks and Dakota  Fanning enjoyed the evening’s cuisine near by.

Kimmel, who was the chosen one to entertain the A-list and press-filled crowd  for the evening following Obama’s speech, joined  the President and correspondents at the head table.

As for how Kimmel felt taking on the roast/host role for the evening, the  comedian told C-Span prior to the event: “Frank  Sinatra hosted this thing…it really is an honor.”

The President began his comedy routine this year not at the podium but  offstage, in a stunt involving a backstage “open-mic” with Obama tossing out  lines such as: “Why is she [Kim Kardashian] famous anyway?,” “I’m like  a five on the ‘Just for Mens’ scale,” “I literally have no idea what  I’m saying tonight,” and “God forbid we keep Chuck  Todd and the cast of Glee waiting.”

One of Obama’s best knee-slappers included referencing an important  anniversary.

“Last year at this time, in fact on this very weekend, we finally delivered  justice to one of the world’s most notorious individuals.” But instead of  showing Osama Bin Laden, Obama flashed a photo of Donald Trump.

Obama also offered a playful jab at his Secretary of State:  “Four years ago, I was locked in a brutal primary battle with Hillary  Clinton. Four years later, she won’t stop drunk-texting me from  Cartagena.”

Of course he didn’t spare his GOP adversary: “It’s great to be here in the  vast, magnificent Hilton ballroom,” Obama said. “Or what Mitt  Romney would call ‘a little fixer upper.'”

When he was winding up, Obama noted that, “I have a lot more material  prepared, but I have to get the Secret Service home in time for their new  curfew.”

As for Kimmel’s  jokes, the funnyman made some digs about Obama’s appearance,  “You’re very skinny…you lost so much weight we thought you were the guy who  won the Boston marathon.”

And Kimmel wasn’t done with the weight jokes. “This is how you know things  are bad,” he said. “Our president is starving. North Korea is sending him food  aid.”

Speaking of skinny, Kimmel didn’t fail to touch upon Michelle’s interest in  getting America healthier: “We used to march, now we occupy.”

And, of course, neither LiLo nor Kim K. were safe.

Kimmel requested of pilot Sully  Sullenberger: “Sully, will you do us a favor? Will you drive  Lindsay Lohan home? Just make sure you don’t run into a goose, and make sure it  isn’t a grey goose.”

And forget Osama, according to Kimmel, the next “biggest threat to America”  is “sitting right there—Kim Kardashian.”

Yet the best line of Kimmel’s roast may have been saved for last, with a  personal shout out to former teacher Mr. Mills, who said he would “never amount  to anything,” to which Kimmel declared: “Well, Mr. Mills, I’m about to high  five the President of the United States.”