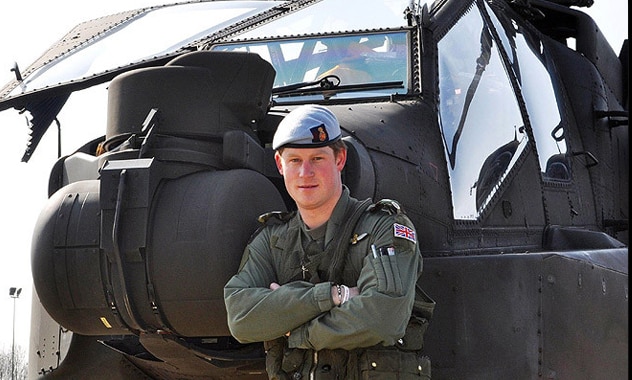 He may have flashed his derrière during his now-infamous trip to Las Vegas a couple of weeks ago, but Prince Harry’s going to want to watch his butt for the next four months.

With Her Majesty’s grandson returning to Afghanistan last week for another tour of duty—this time as a copilot and gunner on an Apache attack helicopter—the Taliban are now threatening to kidnap and assassinate him as part of their insurgency campaign against NATO forces in the country.

“We are using all our strength to get rid of him, either by killing or kidnapping,” Zabihullah Mujahid, a spokesman for the fundamentalist group, told Reuters by telephone from an undisclosed location.

The Taliban rep dubbed the plot “Harry Operations” but refused to give further details other than to add, “We have informed our commanders in Helmand to do whatever they can to eliminate him.”

No word if Harry, better known as Captain Wales among the troops, will remain at Camp Bastion in Afghanistan’s southwest province of Helmand for the entire duration of his mission or whether he’ll participate in combat operations on the front lines.

British military officials have declined to comment on the Taliban threat or discuss details of the 27-year-old royal’s stay in the war zone, citing security reasons.

This is Harry’s second stint in Afghanistan. He was first deployed in 2007 as a forward air controller but ended up leaving the tour early after a number of media outlets violated a press blackout on his presence there.