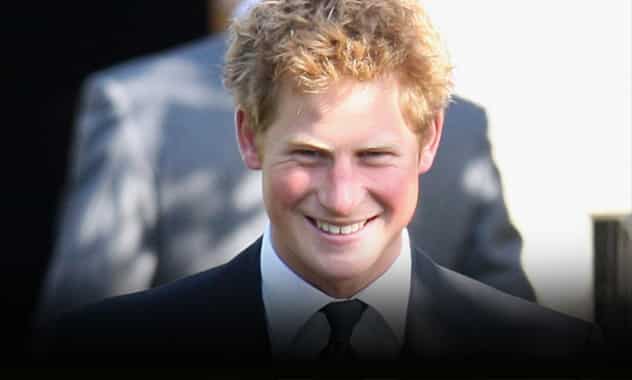 If anyone doubts that the royal family still rules in the United Kingdom…just ask the newspaper editors who have been asked not to go to press with photos of naked Prince Harry in their pages.

Clarence House has specifically requested that British publications not print or post the pics of the 27-year-old’s royal bum online due to the implied privacy violation that occurred when a visitor to Harry’s Las Vegas hotel suite snapped a couple of cell phone pics.

Not legally, but even the notoriously raunchy London tabloids are laying off.

“The royal family can ask to deny the right of the photos being published, but it’s more of the British media self-policing and being afraid to print them,” Rory Carroll, U.S. West Coast correspondent for The Guardian, tells E! News. “In this climate, with the Leveson Inquiry [into press ethics], there’s been so much focus on the media, especially the tabloids and their excesses, like the hacking scandal—it’s made everyone much more skittish.”

The family, which has confirmed that the cheeky pics were indeed of Harry enjoying a “private holiday” in Vegas, is said to have made the blackout request to the Press Complaints Commission, citing the third clause of the PCC Editor’s Code of Practice: “It is unacceptable to photograph individuals in private places without their consent.” (The PCC is not a legal body, but a regulatory agency.)

“I think we’re seeing more restraint from the press than we would have seen a few years ago,” Carroll said. “Five or 10 years ago, there would have been a gleeful rush on the part of many newspapers to splash these photos on their pages. And the fact that they’ve been hesitating reflects the climate of questions and a bit of uncertainty to what they can and cannot get away with, what the public would or would not accept.”

Last year, a hacking scandal brought down the century-old, News Corp-owned News of the World and led to the arrests of several top staffers. Though the company denied it, there was also speculation that the controversy prompted Rupert Murdoch to step down from the boards of the U.K.’s NI Group, Times Newspaper Holdings and News Corp Investments.

Not that the technically voluntary embargo means that ladies and gents in the U.K. are out of luck if they want to see Prince Harry’s bare backside—so long as they don’t just read newspapers or only peruse British websites, that is.

The royal ban “has zero impact in terms of keeping a cap on the news,” Carroll confirmed. “There’s no way to stop a story like this. The genie is out of the bottle and Buckingham Palace is aware of that. I don’t see what they can gain by keeping these stories out of the British press. For the Brits in London or Edinburgh, TMZ is just one click away.”

“If the public wants to see them, they’ve seen them already,” he added. “I think there’s two things the papers are weighing here—one is the effect of publishing them on their reputation. Secondly, they’re weighing how many more copies they would sell by publishing the photos. I’m sure that’s been the question that’s dominating.”

Because so many people can see the photos online for free, “the opportunity is lost to publish the photos exclusively,” Carroll said. “If the photos were exclusive, I think [the papers] would have done so. But now the commission of publishing the photos is minor, so they aren’t willing to taint their reputation.”

He noted that the relative amount of restraint the British press has been showing lately harkens back to the days following the death of Harry’s mum, Princess Diana, who was killed in a car crash while her driver was fleeing paparazzi.

“When Diana died,” Carroll said, “the tabloid press was very defensive because paparazzi were blamed for having precipitated the car crash. There was a lot of hostility towards the media. Tabloid editors were saying, ‘Never again will we dabble our fingers in the stuff of other people’s souls.’  It was a kinder, gentler period of pursuing celebrities and stalking families with paps.

“And I think that period lasted about five minutes.”

by Natalie Finn and Marcus Mulick