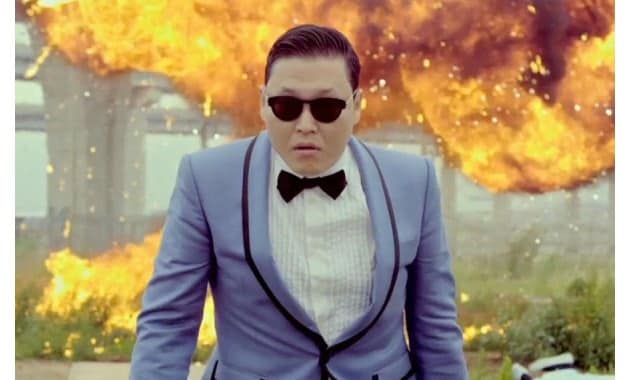 On Friday, YouTube sensation Psy, otherwise known as Park Jae-Sang, made headlines when it was revealed that the “Gangnam Style” star sang lyrics from South Korean rock band N.E.X.T.’s song “Dear American,” including: “Kill those f—ing Yankees who have been torturing Iraqi captives” and “Kill them all slowly and painfully.”

The contentious Anti-American lyrics and photos from a 2004 protest concert were first posted on CNN’s iReport in October. CNN reported that anti-American sentiment flared in the country after the brutal killing of a South Korean hostage by Iraqi insurgents in June that year. Earlier, in 2002, anger ignited when two South Korean schoolgirls were accidentally struck and killed by a U.S. military vehicle.

A video from Psy’s anti-American performance has now surfaced online. In the choppy video, Psy smashes a mock military tank. He was protesting the death of the two Korean schoolgirls, according to Mediaite, and rapped anti-American lyrics.

Psy issued an apology for the lyrics, saying, “While I’m grateful for the freedom to express one’s self I’ve learned there are limits to what language is appropriate and I’m deeply sorry for how these lyrics could be interpreted. I will forever be sorry for any pain I have caused anyone by those words.”

Despite his anti-American past now surfacing, Psy is still confirmed to perform at “Christmas in Washington” on Dec. 21, TNT confirmed to NBC News. President Barack Obama and his family will be in attendance.

Psy topped Justin Bieber to have the most-watched YouTube video of all time for his “Gangnam Style” visuals, which became a viral hit in the U.S. and around the world in 2012. The Associated Press calculated that he will rake in nearly $8 million this year.