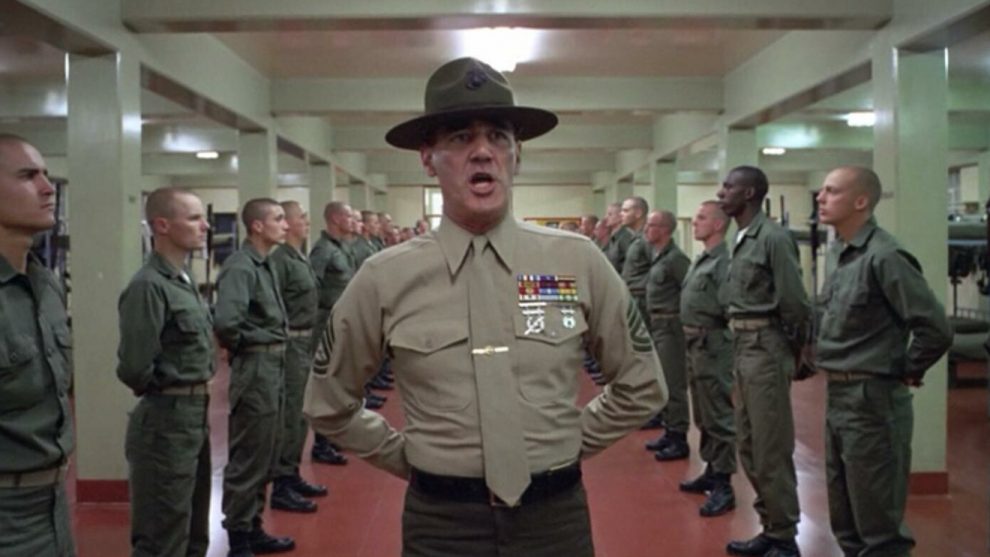 R. Lee Ermey, the tough, no-nonsense drill instructor from FULL METAL JACKET, the voice of Sarge in TOY STORY, and a legendary character actor in countless other films and TV shows, has passed away at the age of 74. The cause of death was due to complications from pneumonia, as announced by his manager Bill Rogin.

Rogin took to social media to make the announcement to the public, and then writing this longer statement about his longtime friend, who was also known as “Gunny.”

He will be greatly missed by all of us. It is a terrible loss that nobody was prepared for. He has meant so much to so many people. And, it is extremely difficult to truly quantify all of the great things this man has selflessly done for, and on behalf of, our many men and women in uniform. He has also contributed many iconic and indelible characters on film that will live on forever. Gunnery Sergeant Hartman of Full Metal Jacket fame was a hard and principled man. The real R. Lee Ermey was a family man, and a kind and gentle soul. He was generous to everyone around him. And, he especially cared deeply for others in need.

There are many Gunny’s, but this one was OURS. And, we will honor his memory with hope and kindness. Please support your men and women in uniform. That’s what he wanted most of all.

Most known for playing military officers, Ermey himself was a veteran of the U.S. Marines, serving from 1961 to 1972. During his service, he was sent to Vietnam in 1968, later spending the rest of his career in Okinawa, Japan until he was medically discharged in 1972. He attained the rank of staff sergeant and was given an honorary promotion to gunnery sergeant in 2002.

On joining the military, Ermey said that a judge basically gave him no choice after getting in trouble with the law several times before he was 18. “I was walking out of the old courthouse in a town called Toppenish, Washington and thinking I’d have to go to where the sun never shines and I walked past this cardboard standee poster of a Marine in dress blues,” he told the Civilian Marksmanship Program in 2010. “I had never even heard of the Marine Corps. I was a farm boy. I never even got to town – ever. And so I spotted that poster and I said ‘holy cow.’ You know my thoughts were if they wore a uniform like that, sharp dress blues, they couldn’t do a heckuva lot of work. This might be something I’d want to check into.”

Ermey later took up an interest in acting and went to school at the University of Manilla in the Philippines, where he eventually landed his a role as a First Air Cavalry chopper pilot in Francis Ford Coppola’s APOCALYPSE NOW. He also served as a technical adviser on the film, and also had a role in THE BOYS IN COMPANY C for Sidney Furie.

Ermey only had two more film roles between 1979 and 1984, all before landing the role that would define him as Gunnery Sergeant Hartman in Stanley Kubrick’s FULL METAL JACKET. Hired on as a technical adviser, Ermey put together an instructional tape where he would go on a tirade against new recruits, which won the praise of Kubrick. The director placed him in the role, allowing him to tweak and improvise his own dialogue. The result was an iconic performance that earned Ermey a Golden Globe nomination for Best Supporting Actor, and kickstarting what would be a long and fruitful career.

He would later go on to have role in movies like MISSISSIPPI BURNING, DEAD MAN WALKING, THE FRIGHTENERS, SAVING SILVERMAN, THE TEXAS CHAINSAW MASSACRE (2003), THE WATCH, tons of TV roles, and had voice roles in video games and, most famously, as Sarge in the TOY STORY trilogy. Recently he starred on his own TV shows, like GUNNYTIME and MILITARY MAKEOVER.

Celebrities from across the spectrum took to social media to pay their respects to Ermey, including FULL METAL JACKET’s Matthew Modine and Vincent D’Onofrio.

Do not go gentle into that good night.
Rage, rage against the dying of the light.

RIP @RLeeErmey you were an incredible man and a wonderful, generous actor. You will be missed.

Ermey was both a respected veteran and talented performer, possessing a unique, irreplicable, commanding presence that will remain apart of pop culture and movie history for the rest of time. Though never a leading man, his persona will remain more memorable than that of the many of the leading actors that have come and will come, with film fans looking back fondly on his work.

Hulu Renews “I Love You, America” With Sarah Silverman
Drama Miniseries ‘Picnic At Hanging Rock’ Will Have Natalie Dormer In Starring Role