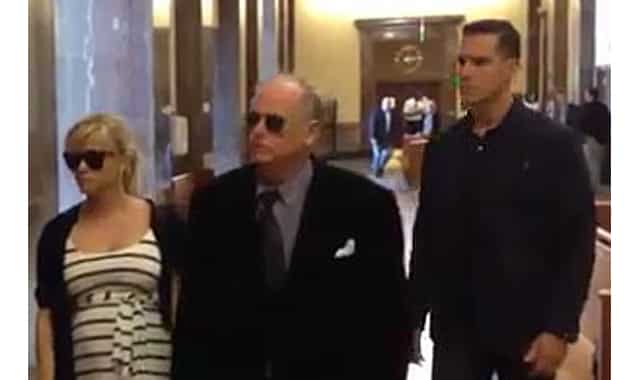 Wonder what Elle Woods would’ve thought of this?

Reese Witherspoon‘s emergency petition for her father, Dr. John  Witherspoon, to be placed in a temporary conservatorship was dismissed by a Nashville judge  who also ordered that his file be sealed from the public, citing privacy  concerns.

The 36-year-old actress filed a request last month to take over management of  her father’s affairs after Witherspoon’s mom, Betty, filed a bigamy lawsuit against her dad seeking to have his Jan. 14  marriage to Tricianne Taylor annulled on the grounds that the  latter may be taking advantage of the fact he is suffering from depression and  early-onset dementia.

News of the conservatorship bid’s dismissal was first reported by  Nashville’s The Tennessean, whose lawyers filed suit with the  court along with a local news channel demanding all legal records in the matter  be unsealed in the public’s interest.

However, Circuit Judge Randy Kennedy sided with Witherspoon’s legal eagle  that disclosure of the case’s details amounted to voyeurism and tabloid  journalism, noting that the release of such documents to the public would “cause  undue harm and embarrassment to the parties.”

Either way, the judge and lawyers for both Witherspoon and her estranged  parents agreed that since there was no longer an emergency, the pregnant Oscar  winner and her brother’s bid for temporary guardianship should be dropped. In  the meantime, Betty Witherspoon has obtained a temporary restraining order  barring Taylor from using the last name Witherspoon for any purpose.

Andra Hedrick, attorney for Reese Witherspoon, could not be reached for  comment. No word whether the media outlets will appeal the decision to keep the  proceedings private.