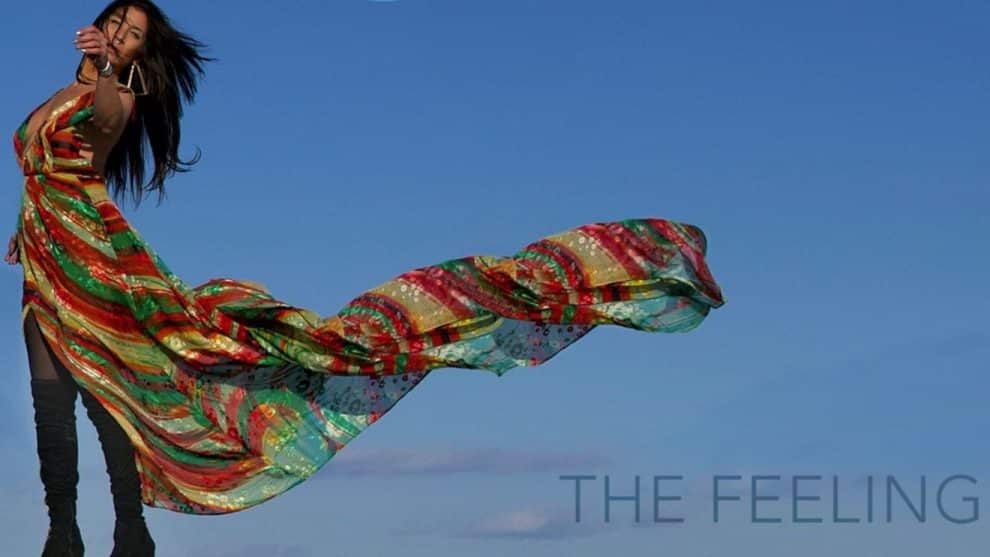 Kirsty Rock, best known around the world as a member of the internationally renowned reggae super group Easy Star All-Stars, brings the fire with her own distinctive, soulful, and earthy reggae sound on her upcoming solo album debut, Slow Burn. The newest single from the record, “The Feeling,” a burst of musical sunshine, releases today, followed by the full album on May 6 via Easy Star Records. Slow Burn has been just that, a small intimate fire that Rock has been stoking for over 10 years. Click here to stream or download “The Feeling”: http://moremusic.at/TheFeeling

“Though ‘The Feeling’ may appear to be the most lighthearted song on the album it was the most difficult and cathartic to write,” Rock recently said. “It’s a reminder to myself that when we release grief, sorrow, pain, and anger, it leaves so much room for love and joy. The song makes me smile and cry at the same time. I don’t know if we have a word for that, but I guess that’s what ‘The Feeling’ is. It gives me all the feelings to release this song in my dad’s honor, after he passed away in August. He was my biggest fan and loved this song. I hope you all do, too.”

Many of the songs on Slow Burn were started on the road with Easy Star All-Stars and with her own long-running band Trumystic, as Rock often found inspiration while in motion. With a busy tour schedule and no rush to put out “product,” she left all expectations behind and let the songs evolve. Observing how relationships unfolded and how political agendas came and went – and what was left in their wake – inspired much of the lyrical content of the record. After the bones of the songs were recorded in her home in Vermont, Rock began reaching out to her friends to breathe more life into the fire until finally the record was ablaze.

The initial tracks completed were handled by Grammy-nominated producer (and longtime friend and collaborator) Matt Stein (Method Man & Redman, DMX, Jason Mraz, Bill Laswell, Blondie) at his Swan7 Studio in New York. The rest of the album brought in many of Rock’s closest collaborators in Easy Star All-Stars, including guitarist/vocalist Shelton Garner Jr. (who co-produced, co-composed and mixed some of the songs), keyboardist/vocalist Elenna Canlas (who also co-produced the title track, while co-composing and performing on others), drummers Ivan Katz and Cliff Simpson, and the horn section of Jennifer Hill, Buford O’Sullivan, and Matt Bauder. Keyboardist Matt Goodwin – also a member of The Movement – sat in on a tune, while bassist Nate Edgar of John Brown’s Body and The Nth Power, also laid down grooves. John Petronzio also of JBB contributed keys on a couple of songs too. Easy Star All-Stars bassist Ras Droppa is a featured vocalist and bassist on the track “It’s Not The Same.” Other reggae veteran horn players Pam Fleming (Burning Brass), Anant Pradhan, and Billy Aukstick also contributed. As you can see, Rock really did call on her extended musical family to finish this labor of love.

“Kirsty is a powerhouse and one of the great vocalists we have been fortunate enough to work with. We are excited for the opportunity to release her solo project on Easy Star and showcase her immense talent,” says Easy Star Records CEO Eric Smith.

Rock came up in the Brooklyn music scene of the 1990s, including her celebrated stint in Trumystic Sound System, which included Dr. Israel as a member and collaborator. Her first vocal with Easy Star All-Stars was on their 2003 album Dub Side of the Moon, performing “The Great Gig In The Sky,” which has garnered millions of streams, and earned praise from the original vocalist on Dark Side of the Moon, Clare Torry. In 2003, she joined the touring version of Easy Star All-Stars and since then has toured in over 30 countries on 6 continents with the band. She was featured on vocals on their studio albums Radiodread (“Paranoid Android,” 2006), Easy Star’s Lonely Hearts Dub Band (“She’s Leaving Home,” 2009), and Easy Star’s Thrillah (“P.Y.T. (Pretty Young Thing),” 2012), as well as on First Light, the band’s album of original songs from 2008. Rock is back on the road with ESA in 2022 after a Covid hiatus, while there is a new record due from the band for the first time since 2012.

Slow Burn is a stunning “debut” for Kirsty Rock. She is already at work on new songs and looking forward to bringing this music on the road with both ESA and on her own in the coming year.