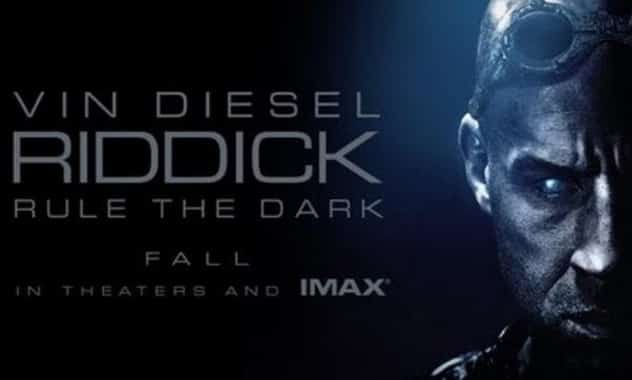 RIDDICK has descended upon San Diego Comic-Con!  Whether you’re a Riddick fan attending #SDCC or you’re tuning in from afar, Universal Pictures has just unleashed several new features for everyone to check out on behalf of the upcoming epic action-adventure film.

#RuleTheDark with Vin Diesel by watching the new RIDDICK RESTRICTED TRAILER that just debuted during the film’s panel at Comic-Con!

Want more #RIDDICK?  Check out the new Motion Comic, enter the Fan Art Contest on deviantART, and access the Rule The Dark app.  See all details below.  RIDDICK is in theaters on September 6th.

As the curtain fell on “The Chronicles of Riddick,” the Lord Marshal met his end and Riddick claimed the Necromonger throne. Now in “Blindsided,” our favorite Furyan ponders his fate as Commanders vie for the crown and assassins track his every move. The Necromonger Armada speeds through space en route to UnderVerse, but will this wanted convict take the vow to rule – or will he return to a life on the run?

Crossed off the list.  Left for dead.  Riddick is the Universe’s Most Wanted.  Nothing is more dangerous than a man that sees in the dark.  Upload your photo and see what you look like with Riddick’s Eyeshine.  Want to Rule the Dark?  Now is your chance… access the new RULE THE DARK App.

Attention Riddick fans and artists!  Universal Pictures and deviantART invite you to enter the newly launched Riddick Fan Art Contest. Seize your tools, digital ortraditional; select your assets; earn your destiny and prevail in the battle of the blank page. Show us how Riddick Rules the Dark and your work could be selected as one of the top winners by Riddick writer/director David Twohy! Get more details now:   http://www.deviantart.com/riddick

The infamous Riddick has been left for dead on a sun-scorched planet that appears to be lifeless.  Soon, however, he finds himself fighting for survival against alien predators more lethal than any human he’s encountered.  The only way off is for Riddick to activate an emergency beacon and alert mercenaries who rapidly descend to the planet in search of their bounty.

The first ship to arrive carries a new breed of merc, more lethal and violent, while the second is captained by a man whose pursuit of Riddick is more personal.  With time running out and a storm on the horizon that no one could survive, his hunters won’t leave the planet without Riddick’s head as their trophy.

Kim Kardashian Leaving ‘Keeping Up With The Kardashians’ Together With Her Mother
Tune In To: HOUSE OF JOY Only On NUVOtv