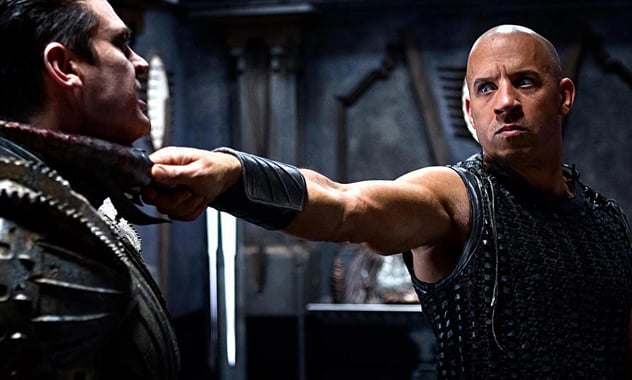 What’s old is new again: Universal has debuted a new trailer for “Riddick,” the third film in Vin Diesel’s “Pitch Black” franchise and the first since 2004’s “Chronicles of Riddick.”

Diesel, who leads the studio’s “Fast and Furious” series, first starred as Riddick in 2000’s “Pitch Black.” The film launched Diesel to stardom, as he followed it up with “The Fast and Furious” and “xXx.” It was the 2004 “Chronicles of Riddick,” however, that momentarily sunk Diesel’s star power: the sequel grossed just $115 million worldwide, barely more than its reported budget of $105 million. Diesel spent the next five years scuffling in a string of misfires before making a triumphant return to the “Fast and Furious” franchise in “Fast & Furious.” Since 2009 film, Diesel has been a box-office titan: “Fast Five” was a global phenomenon and “Fast and Furious 6” is on track to score with audiences as well.

“Riddick,” meanwhile, hits theaters on Sept. 6 and puts Diesel back in familiar anti-hero mode. He plays Riddick once again, an outlaw who gets captured by a group of bounty hunters and then must team with them to survive an attack from a brutal alien species. The film looks to combine elements of any number of classic Westerns plus “Alien” and last year’s “Prometheus.”

Watch the trailer below.