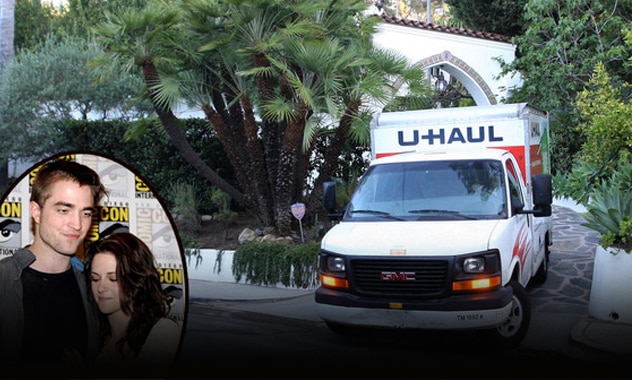 Does this mean Robsten is really over?!

Moving vehicles were spotted at Robert Pattinson and Kristen Stewart‘s love nest in Los Angeles on Saturday. The home, which E! News confirms is R.Pattz’s, has been quiet since the British actor began hiding out last week after K.Stew’s cheating scandal with Snow White and the Huntsman director Rupert Sanders went public.

It’s still unclear if Rob or Kristen moved out of the posh pad first—or if just one of the stars flew the coup—but after one moving vehicle was spotted pulling out of the driveway, another one was seen at the house shortly after.

Looks like the estate that once housed one of the most talked about couples in Hollywood could now be vacant—kind of like the hearts of all the Twi-hards who are also dealing with this possible breakup.

Both Twilight stars have remained MIA from their Los Angeles home since the news broke.

A source close to Pattinson told People that the 26-year-old is “heartbroken and angry” and in seclusion, and not currently in contact with Stewart.