The future of law enforcement has arrived in modern-day Detroit — except that not everything has gone to plan.

Tuesday, June 3 is “RoboCop Day” in the Motor City, promoting the home release of the RoboCop movie starring Joel Kinnaman from earlier this year. The day is being marked by the appearance of the cybernetic cop at various landmarks across the city, including his throwing the first pitch out at Comerica Park at 7pm this evening (Sadly, it’s not Kinnaman in the costume, but a stand in). 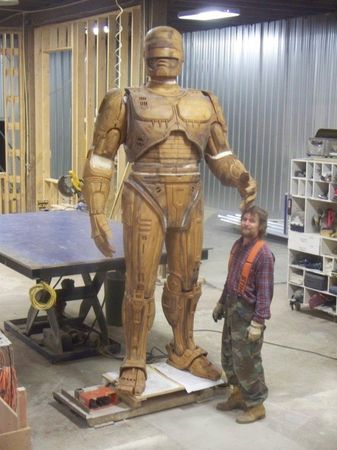 However, the originally-announced centerpiece of the day’s celebrations — the unveiling of a RoboCop statue crowdfunded by fans of the original Paul Verhoeven-directed movie three years ago — was cancelled at the last moment for what turned out to be a very good reason: No-one has informed the people actually responsible for the statue.

“You may have heard in the news today that the RoboCop statue was being unveiled in Detroit today. This was news to us! And not true news,” the group Imagination Station Detroit wrote in response to the announcement. “To be clear: the RoboCop statue is still on track to be finished later this year, and is still in the hands of Giorgio Gikas at Venus Bronze Works in Detroit, but news reports about it being unveiled today are incorrect.”

Those disappointed with the news can always console themselves with the new RoboCop DVD and Blu-ray, select copies of which (Namely, those purchased through Target stores) come with the download code for an exclusive digital comic from Boom! Studios, RoboCop: The Gauntlet. It may not be a 10-foot-tall statue, but on the other hand, it does actually exist.