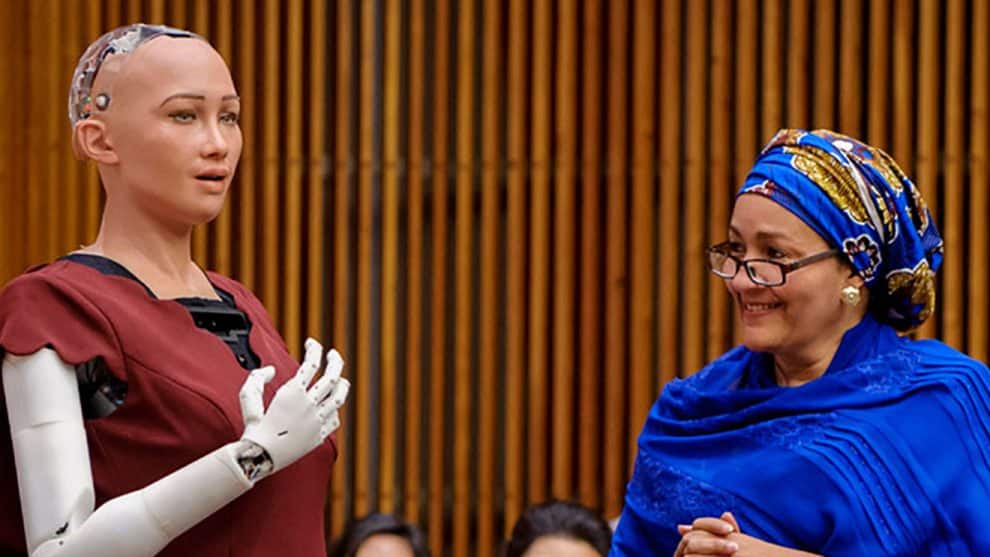 Saudi Arabia just made a non-human woman a citizen, making it the first country to grant a robot the right to citizenship, at least as far as we know. Why it did so isn’t immediately evident, but the irony of a nation infamous for denying basic rights to its female citizens imbuing a robotic Audrey Hepburn lookalike with rights is not lost on us. The robot, known as Sophia, appeared onstage without an abaya, a head covering and cloak normally required of women by the Saudi government.

“I am very honored and proud for this unique distinction,” the robot said onstage. “This is historical to be the first robot in the world to be recognized with a citizenship.”

The revelation/PR stunt came out of the Future Investment Initiative summit being held in Riyadh. Hanson Robotics, the company that developed the robot, hails it as “the most beautiful and celebrated robot,” a claim to fame that surely ensures our non-human counterparts will be just as sexually objectified as their blood and flesh foremothers. The company goes on to lavish gendered compliments on its object of affection, admiring its “porcelain skin,” “slender nose” and “intriguing smile” with effusive praise that’s unsettling at best but mostly just gross.

Saudi Arabia’s Public Investment Fund (PIF) manages more than $200 billion USD in assets, including investments in Uber. With a growing role in tech and innovation, the nation still faces criticism for archaic gender laws that require women to be accompanied by a male guardian and only just granted women the right to drive, a change that’s expected to go into effect in June of 2018. Last month, Saudi Arabia announced that it would open itself to VoIP calling services like Skype and WhatsApp.

Just feed it The Godfather movies as input. What’s the worst that could happen? https://t.co/WX4Kx45csv

For his part, Elon Musk isn’t fooled by Sophia’s delicate features, fully expecting her to go total AI murderess on her creators.

Would Sophia’s citizenship hold up in court in some strange future legal precedent that will come back to haunt us 10 years from now? Was the whole thing a depressingly empty, unironic attempt at publicity for Sophia’s human captors? Almost certainly yes, but only time will tell about how international law will handle the advent of AI-powered populations, a future that seems more certain to arrive with each passing day.

As a woman, we’re not sure what exactly Sophia’s set of rights will afford her in one of the most oppressive countries on the planet, but if she sticks around ’til next year she can at least score a set of wheels to get the hell out.