Vin Diesel officially announced late last night that Romeo Santos will be in Fast & Furious 7. Vin joined Romeo Santos on stage at his sold out Staples Center concert in Los Angeles to make the announcement. “I came here tonight, to tell you, that Romeo will be in Fast & Furious 7”, said Diesel alongside Romeo during the Los Angeles stop of his tour. Fans screamed in excitement as the two shook hands.

The details of the Grammy-nominated singer has yet to be revealed. He’ll be joining Jason Statham, Kurt Russell, and more newcomers alongside series returners Diesel, Dwayne Johnson, Michelle Rodriguez, Jordana Brewster, Tyrese Gibson, Ludacris, Lucas Black, and the late Paul Walker in the James Wan-directed sequel, which Universal will release on April 10, 2015. 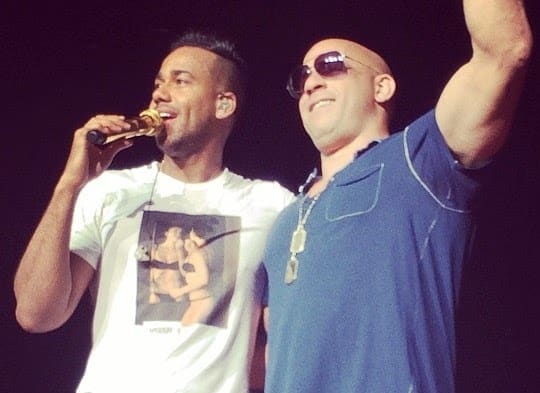 MALEFICENT (in Digital 3D) Arriving In Theaters May 30th
New Content ‘A MILLION WAYS TO DIE IN THE WEST’ – Posters, Still, and Clip!