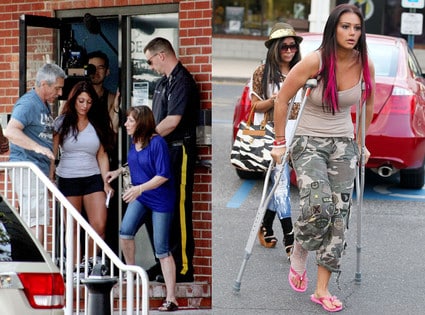 It was a wild weekend at the Jersey Shore and castmates Deena Cortese, 25, and Jenni “JWoww” Farley,  26, are still feeling the heat. JWoww was reportedly involved in a massive bar  brawl Friday night in Seaside Heights, according to TMZ, while Deena was arrested Sunday  on a disorderly conduct charge, E! News has confirmed.

So, how are our favorite guidettes feeling?

They haven’t quite bounced back.

JWoww was spotted hopping around Seaside Heights on crutches Saturday  with a heavily bandaged foot.

According to TMZ, several castmembers were involved  in a “massive” bar brawl at Seaside hotspot Bamboo Bar on Friday night and it  appears Jenni isn’t quite back on her own two feet. The Seaside police  department was unaware of any bar fight and cast reps are so far staying  tight-lipped on the incident.

“Deena walked out of a bar by herself and started to dance in traffic. An  unidentified driver was attempting to drive around her and she wouldn’t let him  pass,” Detective Steve Korman from the Seaside police department tells E! News.  “An officer arrested her and she was charged with disorderly conduct. She was  processed and released.”

Several onlookers also took to Twitter to sound off on Deena’s arrest.

Deena and JWoww aren’t the only Jersey Shore castmembers in a bit of trouble  as of late. On Friday, nude photos of Snooki hit the web, but the usually outspoken  guidette has stayed mum on the incident thus far.

Hey, Snooki might be pregnant, the Situation is totally sober, but if this week is any  indication, season six will have no shortage of drama on the Seaside  stage.

by Brandi Fowler and Alyssa Toomey