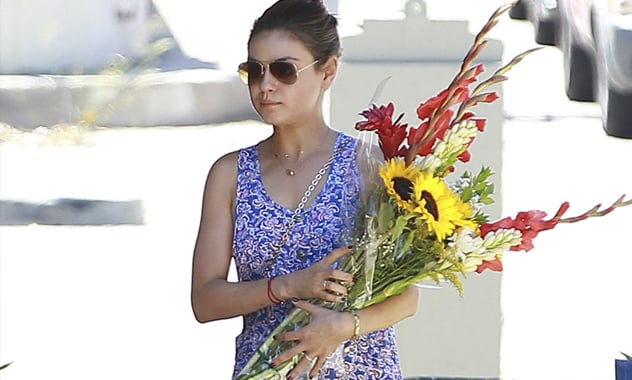 They’ve been quietly dating for over a year  and it looks like Mila Kunis and Ashton Kutcher may have taken the next step in  their romance.

The 30-year-old actress was spotted with a  simple gold band on her ring finger as she picked up a  colourful bouquet of flowers in Studio City, California on Wednesday.

The piece of jewellery has sparked rumours  the stunning actress is engaged to her That 70s Show co-star.

Making the most of her summer  clothes, the  Oz: The Great And The Powerful actress displayed her lean  legs in a printed  blue dress as she stepped out to run errands.

And whilst she looked gorgeous in her summery  ensemble, it was a ring on her left hand that has sparked  speculation.

While the simple band doesn’t resemble a  typical engagement bling, the  placement on the actress’ ring finger will no  doubt get fans talking.

The couple have been looking particularly  close in recent weeks, enjoying a holiday  in China last month.

Mila and the 35-year-old actor obviously  wanted to grab some time together while they can as both have a busy few months  coming up.

After the success of his Steve Jobs biopic, Ashton is preparing to return to filming his show Two And A Half Men, on which he reportedly rakes in $750,000 per episode.

Mila meanwhile will most likely be on the  promo trail soon herself, as her new movie Third Person premieres this month at  the Toronto Film Festival in Canada.

The pair originally met on the set of That  70s Show, where they played on-screen lovers for eight years.

The pair didn’t become romantically involved  until Ashton split from his wife Demi Moore in 2011. An insider recently hinted  that a proposal could be imminent, telling Us Weekly that Mila brings out the  best in her boyfriend:

‘They plan to get engaged soon. Being with  Mila brought Ashton back to who he really is.’

However, many statements by those close to the couple both affirm and deny the rumors themselves, so looks like we’ll have to wait and see what the future will reveal.