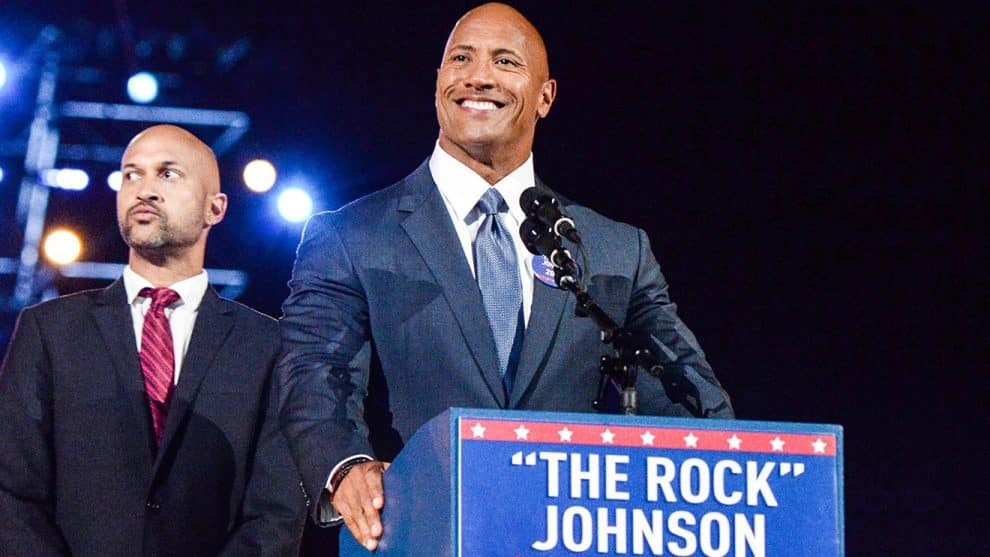 While we’re still a long ways away until the 2020 Presidential Election, current President Donald Trump may find himself going up against The Rock. After hinting in a May interview that he would consider a run for President of the United States in 2020, paperwork has been filed on behalf of Dwayne Johnson for a campaign entitled “Run the Rock 2020,” with the Federal Election Commission. While a lot more has to happen between now and the 2020 election, it seems that the action icon and WWE Superstar has taken his first step towards the Oval Office.

America, I hear you.

Tune in TONIGHT for our season finale of @nbcsnl for suprises and big laughs. #SNLFinale #5xHost #2020 ????? pic.twitter.com/EdEgDwXX4V

The Hill reports that the paperwork for the “Run the Rock 2020” organization was filed on Sunday on behalf of Dwayne Johnsonby a man named Kenton Tilford, who has a West Virginia address. It isn’t ultimately clear what this man’s connection is to Dwayne Johnson, or how he is affiliated with this potential Presidential campaign. The Rock hasn’t addressed this filing on social media yet, but he has spoken about making a serious run for the Presidency just a few months ago.

While promoting his new Baywatch movie in May, The Rock gave an interview where he revealed that fans had been clamoring for a Presidential run from the iconic actor, which made him actually pause and think about whether or not he actually should run. While he didn’t definitively state whether or not he would be running for the highest office in the land in 2020, he did state that he thinks he could make a difference, and that he would like to see better leadership in the White House, and that he would challenge the policies put in place by Donald Trump. Here’s what he had to say in his GQ interview, about how he thought Donald Trump was doing.

“Personally, I feel that if I were president, poise would be important. Leadership would be important. Taking responsibility for everybody. [If I didn’t agree with someone] on something, I wouldn’t shut them out. I would actually include them. The first thing we’d do is we’d come and sit down and we’d talk about it. It’s hard to categorize right now how I think he’s doing, other than to tell you how I would operate, what I would like to see.”

Dwayne Johnson also spoke about a potential run for President during an appearance on The Tonight Show Starring Jimmy Fallon in May, and then just a few days later, he opened his fifth stint hosting Saturday Night Live by “announcing” that he will run for President, with another national treasure, Tom Hanks, as his running mate. Dwayne Johnson is also registered as an Independent, so if he does in fact run for President, he might do so as a third-party candidate, although that has yet to be confirmed. Until then, take a look at a recent tweet from Dwayne Johnson and his appearance from The Tonight Show where he discusses his Presidential run.