Arnold Schwarzenegger (Expendables 2, the Terminator series) stars as the leader of an elite DEA task force whose members are targeted by a mysterious killer in Sabotage, an edge-of-your-seat action thriller coming to Blu-ray™ Combo Pack, including Blu-ray™, DVD and Digital HD with UltraViolet™ and On Demand on July 22, 2014 from Universal Studios Home Entertainment.  Sabotage will also be available on Digital HD on July 8, 2014. 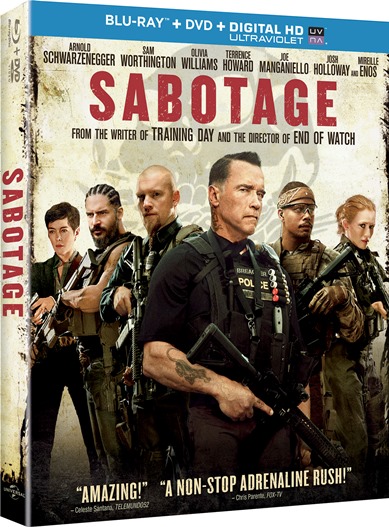 Directed by David Ayer, the acclaimed director of End of Watch and screenwriter of Training Day, Sabotage centers on DEA agent Breacher Wharton (Schwarzenegger), who leads a daring raid on a heavily-armed drug cartel safe house. The raid seems to go off seamlessly, but when the agents involved start turning up dead, everyone is a suspect—even members of their own squad. An explosive tale of loyalty and betrayal that Mark DeCarlo of ABC-TV’s Windy City LIVE calls “a tense, action-packed thrill ride,” Chris Parente of FOX-TV hailed the film “a non-stop adrenaline rush!”

The Blu-ray™ Combo Pack includes a Blu-ray™, DVD and Digital HD with UltraViolet™.

Below is the very first clip specifically for the DVD release.