After getting engaged to the co-founder of Reddit, it only made sense for Serena Williams to announce the news on that website. On Thursday, the tennis superstar returned to Reddit, this time to post a photo that made clear her fiance, Alex Ohanian, did not skimp in the rock department. 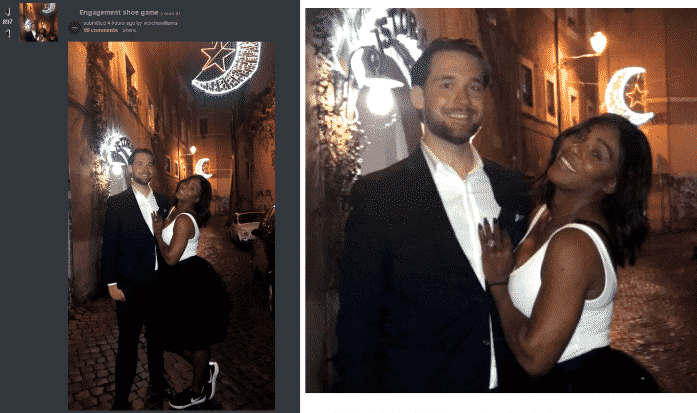 In a post she titled “Engagement shoe game” and submitted to the site’s “Sneakers” and “isaidyes” subreddits, Williams included a photo of her and Ohanian on what appeared to be a side street in Rome. In announcing her engagement on Reddit, Williams had included a poem which indicated that Ohanian had popped the question at a “table” in Rome where they had “met by chance,” and the photo showed the entrance to a restaurant in the background.

It’s not possible to make out the details of the ring Williams sported in the photo, but it’s apparent that it features a very large diamond. Earlier in the week, Williams had teased her fans with an Instagram image of a ring with a taco on it instead of a gemstone, poking fun at her fondness for the food item.

The relationship between Williams, 35, and Ohanian, 33, dates back at least to October 2015, when Us Weekly reported on it. “They met at a lunch,” a source told the magazine at the time, adding, “It’s new.”

Williams had previously been romantically linked to more standard celebrity-types — and while Ohanian is a rock star in the Internet-geek world, he’s hardly a household name — such as rappers Drake and Common. While Ohanian is wealthy by most measures, at a reported net worth of $4.5 million he’s no Internet billionaire, having sold Reddit to Conde Nast a year after launching it in 2006 and before it became one of the world’s 20 most popular websites.

However, many would say that Ohanian is a very lucky man, indeed. The image he posted to Reddit following her announcement, showing him offering a cartoonishly oversized diamond, was not far off the real thing, as it turned out.