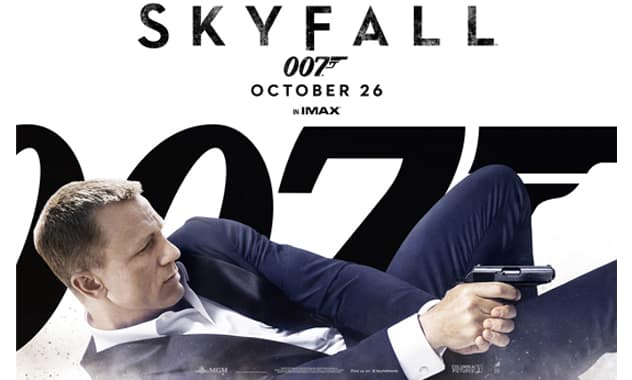 James Bond is back with “Skyfall,” and the earlier reviews are as strong as one of 007’s signature martinis.

“‘Skyfall’ is a great British bulldog of a movie,” wrote Kate Muir from The Times of London. “From the moment the orchestral sound of Adele belts out, sending a nostalgic shiver down the audience’s collective spine, we know this will be a triumphant return to classic Bond.”

Directed by Sam Mendes, an Oscar winner for “American Beauty,” “Skyfall” premieres in the U.K. starting on Oct. 23, meaning members of the British press — and those American critics lucky enough to spy the film as well — had the chance to review the 23rd Bond feature before anyone else. (“Skyfall” is out in the U.S. on Nov. 9.)

In his write up of the “Skyfall” premiere for The Daily Mail, famed columnist Baz Bamigboye quoted Bond historian Graham Rye as saying the film is “up there in the top five of all the 23 films made in the world’s most famous film franchise.” Bamigboye also loved the film, giving it five stars.

Hollywood Reporter critic Todd McCarthy was one of the few American reviewers to get a peek at “Skyfall.” He was equally as impressed.

Dramatically gripping while still brandishing a droll undercurrent of humor, this beautifully made film will certainly be embraced as one of the best Bonds by loyal fans worldwide and leaves you wanting the next one to turn up sooner than four years from now.

“It stands up with the finest work that Deakins has ever done, which pretty much means that it’s as gorgeous as film gets,” noted Oliver Lyttleton for The Playlist. In that same review, Lyttleton favorably compares Mendes’ work in “Skyfall” to the job Christopher Nolan did on “Batman Begins.”

Of course, not every reviewer was totally in love with “Skyfall.” Writing for The Guardian, Xan Brooks states that “Skyfall” has a whiz-bang first half, but doesn’t completely deliver on its set-up:

All of which works terrifically well up to a point. Except that ‘Skyfall’ then falls prey to a common failing of many 50th birthday bashes: it allows sentimentality to cloud its judgment and loosen its tongue. In so doing, it risks blowing James Bond’s cover for good.