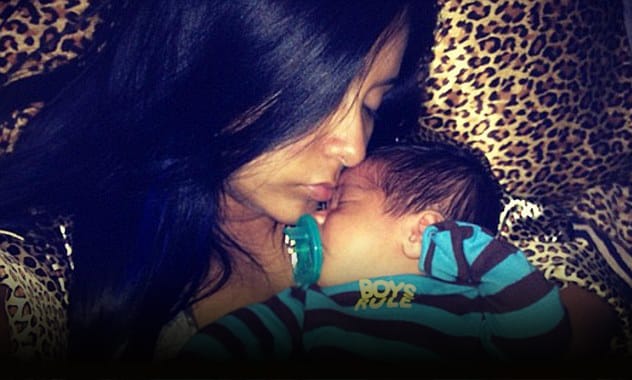 When Snooki welcomed her son, Lorenzo Dominic LaValle, in late August, fans wondered what the little “meatball” would look like. Shortly after, the “Jersey Shore” star introduced Enzo to the world via People magazine. And then last week, she gave her Twitter followers another glimpse of her bundle of joy.

But now Snooki has become more prolific in sharing baby pictures with the public.

“In love with my little man,” Snooki tweeted Wednesday, along with a photo of herself holding little Enzo, sporting a striped onesie that declares “Boys rule.”

Thursday evening, she followed up with another image, bearing the caption “He holds his bottle like a champ!”

While Snooks recently proclaimed, “Catching up on my sleep today! My dads babysitting and IN LOVE,” we’re sure there are plenty of pals who’d like to spend quality time with Enzo. In fact, Rihanna has already volunteered to babysit. But judging by this video, we think her “Jersey Shore” co-star Vinny Guadagnino would be the most fun.