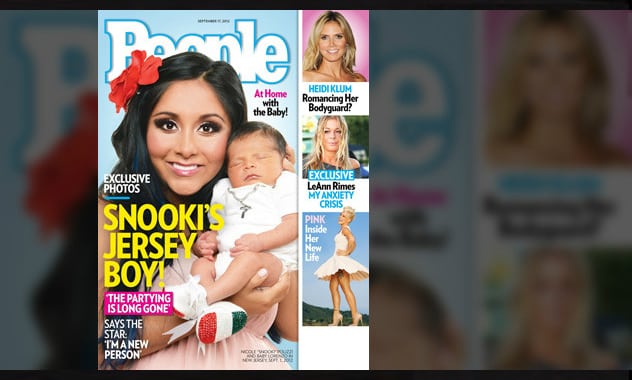 She’s been a mom for just over a week, but Snooki is already showing off baby Lorenzo! The “Jersey Shore” star poses with her son on the latest cover of People magazine.

“It’s a different kind of love that I never felt before,” said Snooki, 24, whose real name is Nicole Polizzi, of her baby, whom she and Jionni LaValle welcomed on August 26 after more than 24 hours of labor.

The couple dished on how they decided to name their son Lorenzo —LaValle thought of it and Snooki “loved it” — and explained that his middle name, Dominic, is after LaValle’s late uncle.

Though this is the first official interview for Snooki since giving birth, it’s not the first time she’s gushed about her pride and joy. Snooki has been busy on Twitter since she became a mom.

“Being a mom is an amazing feeling!!! I love my little man to death! Jionni is such a cute dad. @JLaValle,” she tweeted on Aug. 26.

And in true Snooki fashion, she hasn’t lost her sense of humor despite many sleepless nights.

“I’m legit an old lady. Rockin the diapers with that old lady gangsta lean,” she wrote on Aug. 28.

Ryan Reynolds and Blake Lively Get Married in Secret Ceremony!
‘Anna Karenina’ Reviews: Keira Knightley Gets Raves For New Adaptation, But What About The Film?