Giovanna Marie LaValle is ready for her close-up!

Snooki and Jionni LaValle introduced their 1-month-old daughter to the world Monday. “FINALLY sharing the first pic of my baby girl Giovanna,” Snooki tweeted. ” The MTV reality stars, who announced their engagement in March 2012, are also parents to a 2-year-old son named Lorenzo Dominic LaValle. 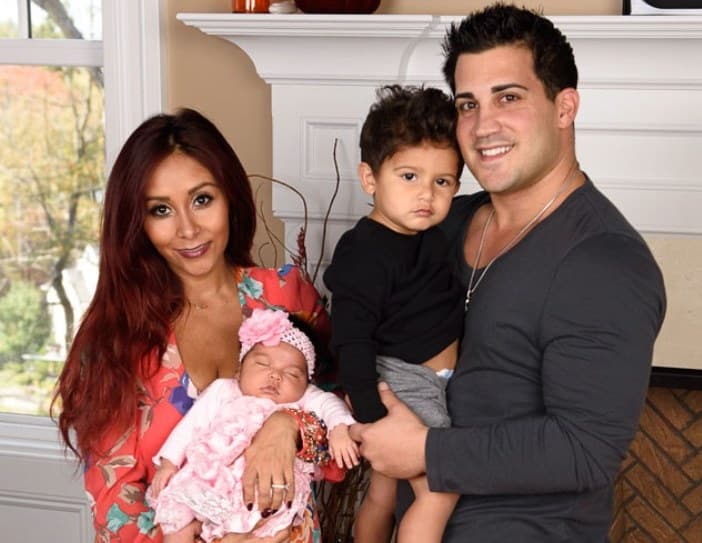 The 26-year-old redhead gave birth on Sept. 26, and yes, it was all caught on camera. The final season of Snooki & JWoww premieres Nov. 5 at 10 p.m. on MTV, and it will also document Snooki’s wedding prep.

“We’re going to be filming up to my wedding because obviously my wedding is on the show and that is coming up very very soon and I’m kind of freaking out about it,” Snooki bloggedMonday about her Great Gatsby-themed wedding ceremony. “I’m not getting cold feet but it’s really scary. Not that it’s scary that I’m going to be with Jionni for the rest of my life but it’s a scary day because everybody is looking at you and we are having so many guests! Jionni’s family is so big and I have a lot of guests so I don’t know…I’m just terrified of the fact that everybody is going to be staring at me, but that’s all good.”

Snooki has been getting back in shape for her trip down the aisle. “Back in the gym today and I can’t wait!!! I might die,” she tweeted Oct. 23. That same day, she Instagrammed a video of herself “#sheddingforthewedding,” writing, “4 weeks post partum doing burpees. Jesus take the wheel.”

Her return to the gym concerned some Twitter followers, but Snooki assured them, “Every woman is different & my doc gave me the okay to start working out & I’m perfectly healthy & killing it.” Still, she’s had some problems. “Any other breast feeding moms have to hold their milk jugs while running??” she asked.

Of course, there’s still plenty more to do before her big day.

In fact, the reformed party girl is also looking forward to her having one last fling before the ring. “My bachelorette party is coming up soon and I’m very excited about that. Just to be with my girls and hang out because honestly ever since I became a mom, I haven’t really done anything for myself! Especially after having Lorenzo, I don’t have any urges to go out and do anything. So the fact that now I have two kids, and I’ve been so dedicated to being a mom…I’m kind of excited to go away for two days with my girlfriends and just have some time to myself,” she blogged. “Definitely going to miss my babies though because I haven’t really left both kids yet so leaving both kids for a couple days is going to be rough!