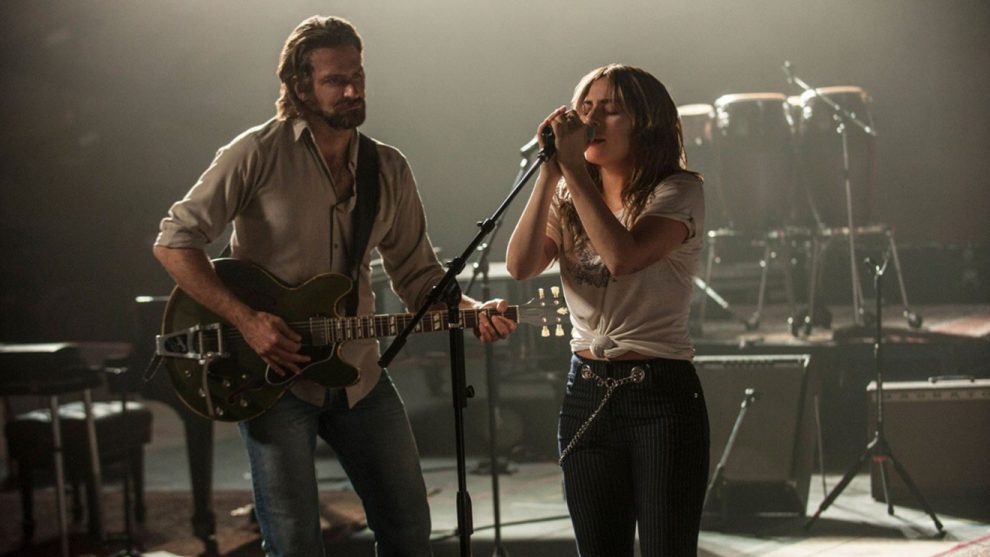 Lady Gaga and Bradley Cooper’s A Star Is Born soundtrack debuts at No. 1 on the Billboard 200 albums chart, giving Gaga her fifth chart-topper and Cooper his first.

The set, which was released via Interscope Records on Oct. 5, starts with 231,000 equivalent album units earned in the week ending Oct. 11, according to Nielsen Music — the biggest week for a soundtrack in more than three-and-a-half years. Of Star’s overall starting sum, 162,000 were in album sales.

The Billboard 200 chart ranks the most popular albums of the week in the U.S. based on multi-metric consumption as measured in equivalent album units. Units are comprised of traditional album sales, track equivalent albums (TEA) and streaming equivalent albums (SEA). The new Oct. 20-dated chart — where A Star Is Born debuts at No. 1 — will be posted in full on Billboard‘s websites on Tuesday, Oct. 16.

Gaga’s Fifth No. 1 Album This Decade: Gaga now has five No. 1 albums in the 2010s — the most among women. (She was previously tied with Taylor Swift, who has four leaders in the ‘10s.) Overall, six acts have tallied at least five albums in the ‘10s: Drake (with eight), Justin Bieber (six), Future, J. Cole, Lady Gaga and Kanye West (all with five).

Biggest Week for a Soundtrack Since 2015: A Star Is Born lands the biggest overall week for a soundtrack in more than three-and-a-half years. The last soundtrack to score a larger week in total units was the Fifty Shades of Grey album, which debuted at No. 2 on the list dated Feb. 28, 2015 with 258,000 units earned.

A Star Is Born also claims the biggest sales week for a soundtrack since Fifty Shades of Grey’s arrival, as the latter sold 210,000 copies in its first frame.

Notably, 2018 is the first year since 2009 in which least three theatrical film soundtracks have led the tally. In 2009, there were four No. 1 soundtracks in total, but only three were tied to a theatrically released movie: Michael Jackson’s This Is It, The Twilight Saga: New Moon and Hannah Montana: The Movie. (The fourth No. 1 soundtrack that year was Fabolous’ Loso’s Way, which was a home video release.)

The film A Star Is Born earned $94.2 million in its first 10 days of release in the U.S. and Canada. The movie premiered in theaters on Oct. 5.

A Second No. 1 for ‘A Star Is Born’: Gaga and Cooper’s A Star Is Born is the fourth big-screen take on A Star Is Born. It follows Barbra Streisand and Kris Kristofferson’s 1977 version, a 1954 iteration with Judy Garland and James Mason and the original 1937 film with Janet Gaynor and Fredric March.

Trench, the act’s second top 10 set, logs the second-biggest week (both in terms of overall units and album sales) for an alternative album in 2018, following Panic! at the Disco’s debut frame with Pray for the Wicked (179,000 units, of which 151,000 were in album sales, July 7-dated chart).

Trench is twenty one pilots’ follow-up to the blockbuster Blurryface, which bowed at No. 1 on the June 6, 2015-dated list and has yet to depart the chart (after 178 consecutive weeks). The album has earned 3.74 million equivalent album units, of which 1.7 million are in traditional album sales.

Trench was led by the single “Jumpsuit,” which spent three weeks at No. 1 on the Alternative Songs airplay chart. A second track promoted to radio stations, “My Blood,” climbed 8-7 on the most recently published Alternative Songs tally (dated Oct. 13).

Rappers Lil Baby and Gunna’s collaborative album Drip Harder starts at No. 4 with 130,000 units, overwhelmingly powered by streaming activity — 121,000 SEA units. That SEA unit sum translates to 164.63 million on-demand audio streams for the album’s tracks, making it the most-streamed album of the week. Drip Harder is Lil Baby’s second top 10, and the first for Gunna.

Eric Church’s Desperate Man bows at No. 5 on the Billboard 200, clocking the country star his fifth top 10 effort. Desperate Man enters with 116,000 units, of which 103,000 were in album sales. The album yields the fourth-largest overall week for a country album in 2018, in both overall units and album sales.

With six debuts in the top 10, it’s the first time in nearly a year that many titles have bowed in the region. It last happened on the Nov. 18, 2017-dated tally.