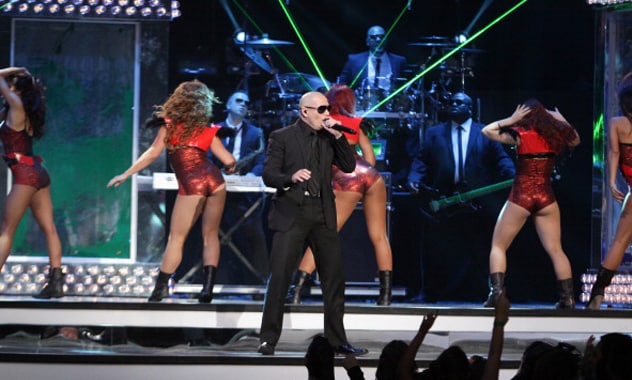 Roll out the red carpet! It’s that time of year again when the hottest latino celebs come out to play and celebrate the best in the music industry.

Last night Miami really turned up the heat and served up an awards show full of spectacular performances and unforgettable moments. The 2012 Latin Billboards on Telemundo, held at the Bank United Center at the University of Miami, kept all of its promises and delivered like no other. The biggest winners of the night were Don Omar and Prince Royce.

The show started off with a boom thanks to Mr. 305 himself! Pitbull blasted on stage and rapped his way through a medley of his well-known hits accompanied by enough pyrotechnics to supply a Disney fireworks show. The crowd really went wild when Sensato came on stage and performed his mega-hit Crazy People alongside Mr. Worldwide. Following this amazing performance, Pitbull went on to win Artista Masculino del Año- Canciones and was sure to represent for Miami Dade-County.

Billboards kept the party rolling with the Mexican DJ group 3Ball MTY, who literally lit the stage on fire! The DJ’s had everyone on their feet dancing and dazzled when they mixed LMFAO’s Party Rock Anthem complete with a glow in the dark dance crew.

One song that is sure to be on everyone’s party list this summer is Paulina Rubio’s newest hit, Boys Will Be Boys. La Chica Dorada proved to everyone that she is one hot mama and sang her latest hit from her much-anticipated English album.

This was also a big night for la música regional Mexicana. The Texas based band, Intocable, was honored with the Billboard Lifetime Achievement Award for their incredible musical career spanning more than 15 years. Performing their classic hits such as Contra Viento Y Marea it’s easy to understand why Intocable is, as the band name says, untouchable.

La Señora Jenni Rivera pleased her female fans as usual and hit the stage where she belted out a mix of old songs with a new twist such as Isabel Pantoja‘s classic Asi Fue with a bachata beat. Other memorable performances were given by Larry Hernandez and Gerardo Ortiz, who won for Solista Regional Mexicano del Año.

Perhaps the biggest musical absence and emotionally charged moment of the night came courtesy of none other than the queen of Tejano music, Selena. Her brother, A.B. Quintanilla came to the awards show wearing a white jacket with a beautiful Selena design on the back and introduced the biggest tribute of the night.

The tribute brought Selena back to life with Samo from Camila giving a spectacular rendition of her classic hit Amor Prohibido. El Gallito Feliz, Christian Castro performed a mix of Selena’s mega-hit Como La Flor accompanied by a group of Selena doubles wearing the famous purple jumpsuit that established the singer as a fashion icon.

¿Dónde estaban los boricuas?! Puerto Rico definitely had a big night at the Latin Billboard Awards and arguably some of the best performances of the night.

The king of salsa Marc Anthony won the coveted Hall of Fame Award, which was presented to him by Emilio Estefan and honored his extensive work in music, philanthropy and acting. The Puerto Rican powerhouse inspired everyone in the audience during his emotional acceptance speech saying,

“I began as a child with a dream in New York City. You only need a dream sometimes.”

Then the most amazing collaboration happened as Olga Tañon walked on stage singing a dramatic version of Ahora Quién, followed by Gilberto Santa Rosa who sang yet another Marc Anthony classic. Marc himself jumped on stage and all three salsa legends sang Qué Precio Tiene El Cielo, needless to say the crowd was going wild.

Top honors of the night went to yet another Puerto Rican who pulled out all the stops and easily gave one of the best performances the night, of course no other than Don Omar. With 8 Billboard awards under his belt, Don Omar wowed fans as he sang Dutty Love with the lovely Natti Natasha. But it didn’t stop there, out of nowhere Akon jumps on the other side of the stage and the duo begin performing a remix of Danza Kuduro. By the time he began singing Hasta Que Salga El Sol everyone was dancing.

The night ended with an epic first-time performance by Brazilian singer, Michel Telo who sang the oh-so popular song Ai Se Eu Te Pego. The singer had the Spanish-speaking audience screaming out the infectious Portuguese lyrics and magically transported everyone to Brazil.

All in all, the 2012 Latin Billboard Awards gave a show like no other. I can’t wait for next year!