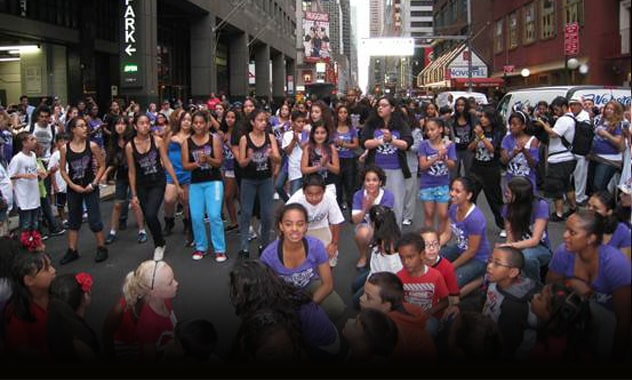 The 5th Annual “Dare to Go Beyond” Children’s Performing Arts Camp, hosted by R.Evolución Latina, concluded today with an exciting song and dance extravaganza in partnership with “Step Up Revolution,” the major dance motion picture that opens July 27, 2012 nationwide. The film, which highlights elaborate, cutting-edge flash mobs with a message, aligns with R.Evolución Latina messaging and goals of empowering Hispanic youth to make a difference through the arts.

Nearly 200 students from schools and community centers citywide convened today at the legendary Roseland Ballroom to learn choreography, rehearse, work with directors and video crews, and ultimately performed a full dance-sequence from the film for the cameras. The theme of the event was “Imagination,” consistent with the theme of the one-week educational program.

“The Dare to Go Beyond Children’s Performing Arts Camp, teaches students how to use the arts as a tool for inspiration and empowerment,” said actor/choreographer Luis Salgado, Co-Founder of R.Evolución Latina. “So what better way to conclude the 2012 Camp, than an unprecedented session where the students will create the magic of starring in their own music video. This experience will cover all aspects of their training and beyond, proving that with courage, hard work and imagination, possibilities are endless,” Salgado added.

The performance was recorded outdoors, flash mob-style, at 1:15pm, in front of the Roseland, located at 239 W. 52nd Street, between Broadway and Eight Avenue. The NYPD briefly closed the street for the celebration.

About Step Up Revolution

Summit Entertainment brings Step Up Revolution, the next installment in the worldwide smash Step Up franchise, to theaters on July 27, 2012.. The film, which sets the dancing against the vibrant backdrop of Miami introduces us to Emily (Kathryn McCormick) who arrives in Miami with aspirations of becoming a professional dancer and soon falls in love with Sean (Ryan Guzman), a young man who leads a dance crew in elaborate, cutting-edge flash mobs, called “The Mob.” When a wealthy business man threatens to develop The Mob’s historic neighborhood and displace thousands of people, Emily must band together with Sean and The Mob to turn their performance art into protest art, and risk losing their dreams to fight for a greater cause.

For more information about “Step up Revolution” please visit http://summit-ent.com/. The film can also be followed on Facebook: StepUpMovie or Twitter: stepupmovie

R.Evolución Latina’s 5th Annual “Dare to Go Beyond” Children’s Performing Arts Camp is a 5-day educational program for children ages 7 to 17, made possible with support from the Herman Goldman Foundation. Nearly 30 Broadway performers and international artists donated their time as volunteer instructors. The Camp held at Pearl Studios kicked off last Monday with a special visit and surprise performance by child actors Nia Ashleigh, Imani Dia Smith, and Judah Bellamy, who currently star in the Broadway production of The Lion King.

For more information about the “Dare to Go Beyond” Children’s Performing Arts Camp, and all of R.Evolución Latina’s upcoming productions, and educational programs, the public can visit www.revolucionlatina.org. The organization can also be followed on Facebook: revlatina, or Twitter: revlatina.