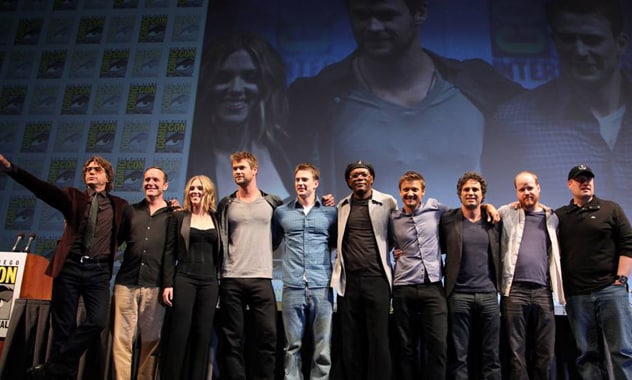 With “Iron Man 3” passing the $740 million mark in worldwide ticket sales, Marvel Studios is king of the jungle at the moment. The production company behind “Marvel’s The Avengers,” all three “Iron Man” films, “Thor,” “Captain America” and “The Incredible Hulk” has seen its profile rise in the last five years thanks to the global thirst for superhero movies.

“I’d like to think, as we make more movies and they become more successful, there are less and less people that have never seen any of the other ones,” Marvel Studios president Kevin Feige told HuffPost Entertainment when asked about worries that expanding the Marvel universe in upcoming films like “Guardians of the Galaxy” and “Ant-Man” would alienate the audience.

Yet that success hasn’t come without a price. As Deadline.com’s Nikki Finke noted this week, Marvel is playing hardball with the cast of “The Avengers 2,” a decision that could lead to new actors stepping into the roles made famous by Robert Downey Jr. and Chris Hemsworth.

“Isn’t that crazy?” Downey joked to GQ. “They’re so pissed. I can’t believe it. I’m what’s known as ‘a strategic cost.'”

Or maybe not. Feige has praised Downey for bringing Tony Stark to life in the “Iron Man” franchise, but he doesn’t necessarily think Downey is irreplaceable.

“I don’t think Robert will be playing this character for another 30 years, and I certainly hope the character stays in movies for the next 30 years — just like James Bond,” Feige told HuffPost Entertainment. “I would say before George Lazenby and Roger Moore, Sean Connery was James Bond. It will take a while to fill any shoes, whether it’s filmmaker shoes or writer shoes or certainly actor shoes. I think Tony Stark is an interesting enough and rich enough character that he can persevere. That being said, I hope that doesn’t happen any time soon. It certainly is our plan to continue to have Robert Downey in the persona of Tony Stark for many, many years to come.”

In an interview with EW, however, Feige called Stark “as evergreen as James Bond, Batman, or for that matter, Spider-Man,” all characters that have had multiple actors play them onscreen.

Feige hasn’t said similar things about Thor, the character Hemsworth plays in the Marvel universe. Finke, however, noted that Hemsworth is unsigned for “Marvel’s The Avengers 2” and apparently not totally willing to acquiesce to Marvel’s demands. For instance, according to HitFix writer Drew McWeeny, Hemsworth had to pay for his own gym membership during production of “Marvel’s The Avengers”:

Marvel, of course, has a history of playing unsentimental hardball with actors. Terrence Howard, who played James Rhodes in “Iron Man,” was paid more than Downey to appear in that film; when the time came to negotiate for “Iron Man 2,” however, Marvel sought to cut his salary. The negotiations failed and Howard was replaced by Don Cheadle. Howard later said the “Iron Man” dispute was responsible for “killing” his career.

All of which raises the question: Can anyone star in “Marvel’s The Avengers 2,” or are the roles wedded to Downey, Hemsworth and fellow stars Chris Evans, Scarlett Johansson, Mark Ruffalo and Samuel L. Jackson? Vote in the poll below. For more on the wild and crazy world of Marvel negotiations, head over to Deadline.com.