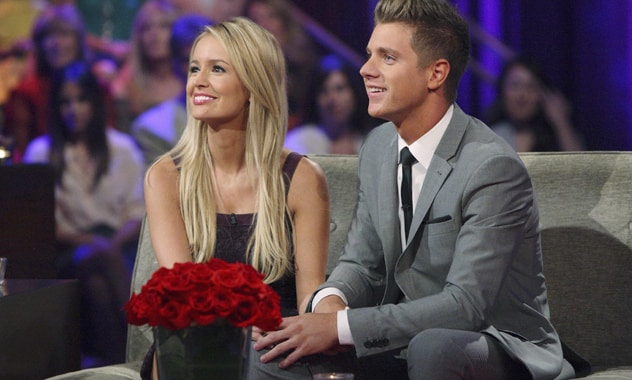 Say it ain’t so! A Bachelorette romance that’s ended before the altar? And on not-so-platonic terms?! This has never happened before! How could a reality show setup possibly end like this? We are weeping into our roses as we type!

Such are the claims against Emily Maynard and Jef Holm that have been circulating this week, with reports claiming Emily cheated on her fiancé resulting in a blowout fight while vacationing in South Carolina.

For the record, Emily herself shot down the rumors, claiming that the info was dubious. “It’s just bogus a ‘source,'” she said yesterday.

So who might the bogus source be? According to an Us Weekly report published today and covering this week’s issue, the info came from Jef’s own brother.

“I can tell you that it’s all 100 percent true,” Mike Holm tells the magazine. “I was there and I heard the fight and watched the whole thing go down, Emily leaving and everything.”

As Mike’s story goes, the cheating fiasco went down while Emily and her 7-year-old daughter, Ricki, were vacationing with the Holms family. According to an earlier report, Jef found “explicit text messages and photos to and from another man.”

“I love my brother very much and, like the rest of our family, I just want him to be happy,” Mike continues. “We all love Emily, too. Mistakes happen, we all get that. I hope they can work it all out, but as far as [the] story goes, it’s all true.”

The seemingly unphased Jef quickly took to Twitter today to offer his side of the story, writing, “It’s crazy what people will do, even family members, to see their name in a magazine.”

Despite the reports—not to mention the show’s well-documented dubious history of finding lasting love matches—we wish the (formerly?) happy couple the best.