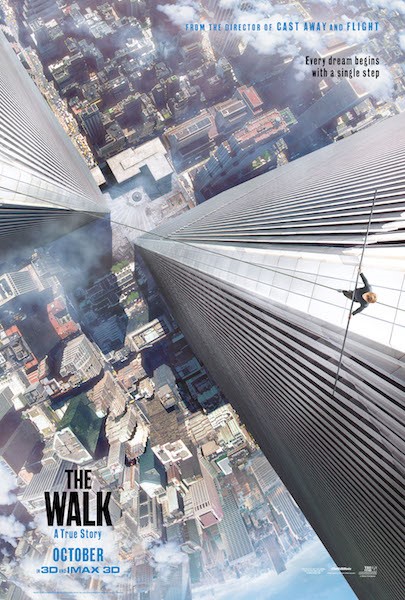 New York, NY (June 4, 2015) – The Film Society of Lincoln Center announced today that Robert Zemeckis’s The Walk will make its World Premiere as the Opening Night selection of the upcoming 53rd New York Film Festival (September 25 – October 11), which will kick off at Alice Tully Hall. A true story, the film is based on Philippe Petit’s memoir To Reach the Clouds and stars Golden Globe nominee Joseph Gordon-Levitt as Petit, the French high-wire artist who achieved the feat of walking between the Twin Towers in 1974. The Walk will be the second 3D feature selected for the Opening Night Gala since Ang Lee’s Life of Pi in 2012 and also marks Zemeckis’s return to the Festival after Flight, the 2012 Closing Night Gala selection. Today’s announcement coincides with the release of the film’s trailer, which can be viewed at movies.yahoo.com. The film will be released in 3D and IMAX 3D on October 2, 2015.

New York Film Festival Director and Selection Committee Chair Kent Jones said: “The Walk is surprising in so many ways. First of all, it plays like a classic heist movie in the tradition of The Asphalt Jungle or Bob le flambeur—the planning, the rehearsing, the execution, the last-minute problems—but here it’s not money that’s stolen but access to the world’s tallest buildings. It’s also an astonishing re-creation of Lower Manhattan in the ’70s. And then, it becomes something quite rare, rich, mysterious… and throughout it all, you’re on the edge of your seat.”

Robert Zemeckis added: “I am extremely honored and grateful that our film has been selected to open the 53rd New York Film Festival. The Walk is a New York story, so I am delighted to be presenting the film to New York audiences first. My hope is that Festival audiences will be immersed in the spectacle, but also to be enraptured by the celebration of a passionate artist who helped give the wonderful towers a soul.”

Sony Pictures Entertainment Motion Picture Group Chairman Tom Rothman said: “On behalf of TriStar and Sony, I want to thank Kent and the NYFF for this great honor. The Walk is a love letter to the Twin Towers, which through the unique magic of cinema, come back to vibrant, inspiring life. But it is also a universal story of the determined pursuit of impossible dreams, told by one of our greatest living filmmakers, and the NYFF has always been a place where such dreams come true.”

NYFF previously announced Luminous Intimacy: The Cinema of Nathaniel Dorsky and Jerome Hiler, the first-ever complete dual retrospective of the experimental filmmakers works that will include the world premiere of Dorsky’s Intimations, a new untitled work, and New York premieres of Summer, December, February, and Avraham.

Tickets for the 53rd New York Film Festival will go on sale in early September. Becoming a Film Society Member at the Film Buff Level or above provides early ticket access to festival screenings and events ahead of the general public, along with the exclusive member ticket discount! To find out how to become a Film Society member, visit filmlinc.com/membership.