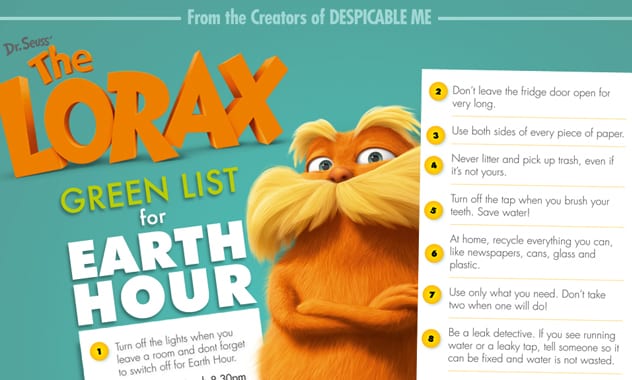 Today, Boys & Girls Clubs of America (BGCA) announced the launch of “The Lorax Pledge Drive,” based on Universal Pictures’ Dr. Seuss’ The Lorax movie, to engage Club members in helping their friends, families and communities save energy, money, and make a difference for the environment.  “The Lorax Pledge Drive” is part of BGCA’s participation in EPA’s Team ENERGY STAR® initiative to educate American youth about the benefits of saving energy.  The effort also extends EPA’s collaboration with Dr. Seuss’ The Lorax, currently the biggest animated film of the year, coming to Blu-ray™ and DVD on August 7.

EPA’s Team ENERGY STAR empowers kids to help protect the climate through easy-to-implement, money-saving actions and provides them an outlet for sharing their passion for preserving the environment. With Dr. Seuss’ The Lorax as the engaging theme for Team ENERGY STAR, kids can learn and have fun at the same time.

BGCA, which serves nearly four million young people through some 4,000 Clubs, have joined EPA in this effort by running their own Team ENERGY STAR Challenges. Club members are encouraged to participate in energy-saving projects and are recognized by EPA and provided additional rewards donated to BGCA from Samsung Electronics America.   “The Lorax Pledge Drive” is their latest challenge. Clubs collect pledges to save energy among their friends, families and others.  Top pledge drivers will win an ENERGY STAR qualified Samsung LED TV and a library of Universal titles. The grand prize for winners who sign up the most new pledges will be a trip to Universal Studios Hollywood.

“This partnership with EPA’s Team ENERGY STAR is a valuable part of our many successful initiatives to inspire good character and citizenship in the young people we serve,” said Romero Brown, Vice President of Program and Youth Development Services, Boys & Girls Clubs of America. “I can’t think of any better opportunity than the widely anticipated Blu-Ray/DVD release of Dr. Seuss’ The Lorax to show the world how we’re empowering young people to make a difference in the fight against global warming.”

“EPA is proud to work with The Boys & Girls Clubs of America to help engage America’s youth in protecting the climate by providing them with ways to help their families save energy at home,” said Jill Vohr, Director of Marketing, EPA’s ENERGY STAR Labeling Branch, “Effectively reaching the next generation of environmental protectors is critical to the future health of our planet and bringing together the Boys & Girls Clubs and Dr.  Seuss’ The Lorax is a great way to do that.”

“With his classic book, The Lorax, Dr. Seuss found a compelling and hopeful way to

teach kids about the importance of being good shepherds of the environment by conserving natural resources,” said Craig Kornblau, President, Universal Studios Home Entertainment.  “Universal is extremely pleased to join with the Boys and Girls Clubs of America and EPA’s Team ENERGY STAR to continue educating young people and spread Dr. Seuss’ message, which is just as important today as it was 40 years ago.”

About Dr. Seuss’ The Lorax

The imaginative world of Dr. Seuss comes to life like never before in this visually spectacular adventure from the creators of Despicable Me! Twelve-year-old Ted will do anything to find a real live Truffula Tree in order to impress the girl of his dreams. As he embarks on his journey, Ted discovers the incredible story of the Lorax, a grumpy but charming creature who speaks for the trees. Featuring the voice talents of Danny DeVito, Ed Helms, Zac Efron, Taylor Swift, Rob Riggle, Jenny Slate and Betty White, Dr. Seuss’ The Lorax is filled with hilarious fun for everyone!

Andy Griffith Dead: Actor Dies At Age 86
THE RECORD-SHATTERING MOVIE ASSEMBLES AS YOU’VE NEVER SEEN IT BEFORE ON BLU-RAY 3D