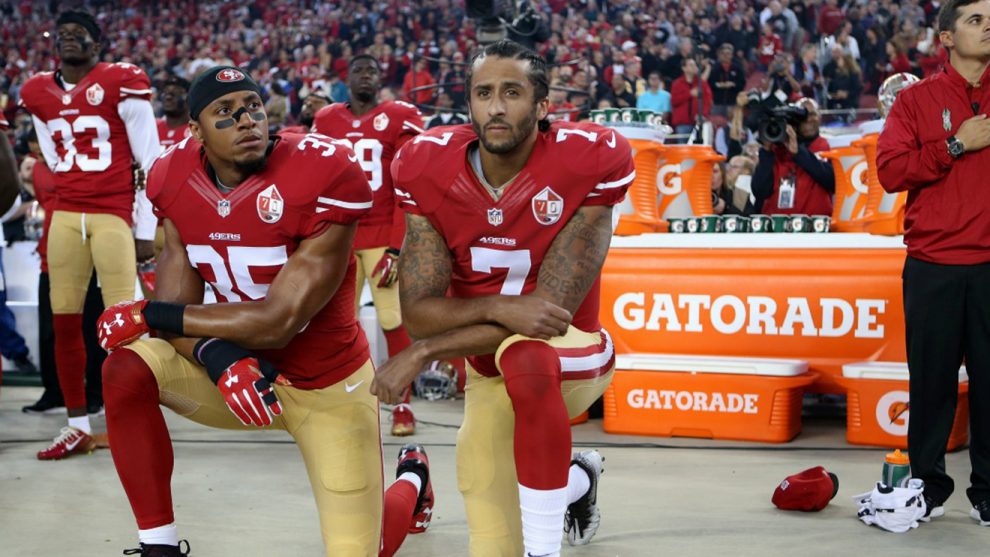 The NFL reportedly approved research from a Washington-based data firm to poll Americans on whether they think teams should sign Colin Kaepernick and if they believed the beleaguered quarterback remained a free agent because of his play or because of his decision to knee for the national anthem.

The poll was conducted by The Glover Park Group, which was co-founded by then-NFL communications head Joe Lockart, in the summer of 2017 and sought Americans’ opinions on domestic violence, gambling, protests and player safety, but Kaepernick was the only player that was mentioned by name, Yahoo Sports reported Thursday.

The firm also sought data about Americans’ attitudes about disciplining players who protest during the national anthem to bring awareness over racial injustices, sources told Yahoo Sports. The data was reportedly broken down into multiple categories, including race, political affiliation and generation.

The study revealed deep divisions when it came to the protests. White NFL fans supported disciplining players for their protests, while African-American and Latino fans didn’t support any penalties for protests, the report said.

The polling data was sent to several top NFL officials, including Commissioner Roger Goodell. It’s unclear how much – if any – of the data was actually taken into account but it was clear that league officials’ were thinking of the fans when the new national anthem policy was announced.

“You know how many letters I got last fall?” Pittsburgh Steelers owner Art Rooney told Sports Illustrated. “Yeah, the fans’ point of view on this was definitely a factor. We heard from a lot of fans over the last six months. No question that was part of the decision-making. [Those] people expect the players to be respectful during the anthem. Pretty simple.”

Goodell also said in a memo to teams in October 2017 that he expected teams to stand for the anthem.

“The current dispute over the National Anthem is threatening to erode the unifying power of our game.” That same memo also went on to discuss fan attitudes, saying “Like many of our fans, we believe that everyone should stand for the National Anthem,” the memo read.