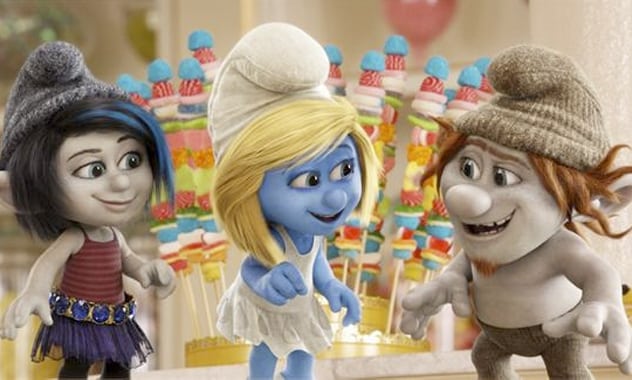 Britney Spears added, “I have always loved the Smurfs as a kid and now my boys are the biggest Smurfs fans EVER. I wanted to surprise them with a song in the movie. I know they’ll think it’s Smurftastic!”

Lia Vollack, president of Worldwide Music for Sony Pictures, added, “We are completely thrilled to have Britney involved with The Smurfs. She is an amazing artist and her boys are Smurfs fans, so it’s a great fit for all of us.”

Raja Gosnell, director of The Smurfs 2, added, “I am very excited that Britney is joining our smurfy adventure. ‘Ooh La La’ is the perfect Smurf-party song, and the perfect button on the film for audiences around the world.”

In this sequel to the hybrid live action/animated family blockbuster comedy The Smurfs, the evil wizard Gargamel creates a couple of mischievous Smurf-like creatures called the Naughties that he hopes will let him harness the all-powerful, magical Smurf-essence. But when he discovers that only a real Smurf can give him what he wants, and only a secret spell that Smurfette knows can turn the Naughties into real Smurfs, Gargamel kidnaps Smurfette and brings her to Paris, where he has been winning the adoration of millions as the world’s greatest sorcerer. It’s up to Papa, Clumsy, Grouchy, and Vanity to return to our world, reunite with their human friends Patrick and Grace Winslow, and rescue her! Will Smurfette, who has always felt different from the other Smurfs, find a new connection with the Naughties Vexy and Hackus – or will the Smurfs convince her that their love for her is True Blue? Returning cast includes Neil Patrick Harris, Jayma Mays, Sofia Vergara, with Katy Perry as Smurfette and Hank Azaria as Gargamel. Brendan Gleeson joins the cast as Victor. The film is directed by Raja Gosnell and produced by Jordan Kerner. The screenplay is by J. David Stem & David N. Weiss and Jay Scherick & David Ronn and Karey Kirkpatrick with a story by J. David Stem & David N. Weiss & Jay Scherick & David Ronn, based on the Characters and Works of Peyo.

The story of the Smurfs – a property created by Peyo – started in 1958 with the creation of comic books which were later brought to both the big and small screen. Over the years, the little blue characters haven’t just limited themselves to the page and the screen. They have inspired records and CDs that have sold millions of copies, entire collections of figurines and toys, and many more products. In all, more than 3,000 derived products have been produced and leading brands and companies have spread their messages worldwide with the help of the Smurfs. A multitude of new projects appear regularly, thus making the success of the Smurfs planetary!

Michael Bay’s Eye For Talent Countdown.Check Out a Few Actresses He Gave Breakout Out Roles To. Round 2
Emilio Estefan & Target Celebrate the Exclusive Release of the Sound Machine