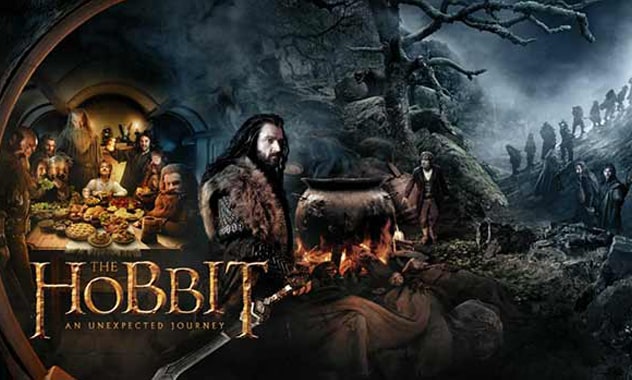 In the lawsuit filed in New York, the Weinsteins said their 1998 sale of the rights to J.R.R. Tolkien’s “The Hobbit” and “The Lord of the Rings” trilogy to New Line applies to all “Hobbit” sequels. Warner Bros. elected to split “The Hobbit” into three films, the second of which, “The Hobbit: The Desolation of Smaug,” opens in theaters Friday.

The Weinsteins are seeking $75 million in damages.

Warner Bros. responded with a statement calling the Weinsteins’ sale of Tolkien’s book rights “one of the great blunders in movie history.” The studio said the Weinsteins and Miramax agreed to be paid only for the first film based on each book.

“No amount of trying to rewrite history can change that fact,” Warner Bros. said. “They agreed to be paid only for the first motion picture based on ‘The Hobbit.’ And that’s all they’re owed.”

The rights to Tolkien’s books were owned by Miramax, which was founded by the Weinsteins. After trying to develop the movies, they sold the rights to New Line (which later merged with Warner Bros. and is owned by Time Warner) in 1998 for 5 percent of the profits on each film.

The “Lord of the Rings” films grossed nearly $3 billion worldwide. Along with “The Hobbit: An Unexpected Journey,” the movies have each netted the Weinsteins more than $100 million. Although the Weinsteins have since sold Miramax to Disney, they retained a share in “The Hobbit” profits.

The dispute will hinge on how the 1998 agreement is interpreted. A copy of the agreement was shared with The Associated Press. It reads that the terms apply to “the first motion picture, if any, based in whole or in part upon such book which is produced … but excluding remakes.”

The Weinsteins’ suit alleges the three “Hobbit” films are installations of one movie, noting that director Peter Jackson largely shot all three at once.

“We are surprised and frustrated by the position Warner Bros. is taking with regards to ‘The Hobbit’ franchise,” Bob and Harvey Weinstein said in a statement. “Since the beginning, Miramax, Harvey and Bob have been a force in getting these books to the screen. In fact, they funded the initial technology for the films at Peter Jackson’s (special effects company) WETA. Without these early investments, none of these pictures would have been made.”

The third “Hobbit” film, “There and Back Again,” is due out next December.

This is the second public argument between the Weinsteins and Warner Bros. this year. They earlier feuded over the use of the title “The Butler.” Warner Bros. had protected the title from an obscure 1919 silent short film with the Motion Picture Association of America’s title registry. The MPAA ruled that Weinstein Co. couldn’t use the title but could go forward with “Lee Daniels’ The Butler.”

Harvey Weinstein then claimed that Warner Bros. offered the title “The Butler” if he dropped his claim to “The Hobbit” sequels. Warner Bros. denied that allegation.