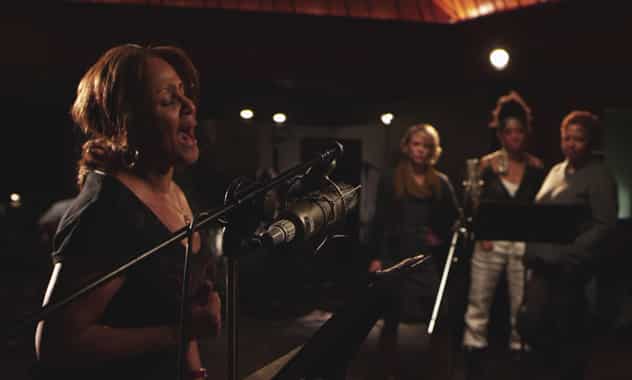 RADiUS announced today that Merry Clayton, Lisa Fischer, Judith Hill and Darlene Love who star in the company’s Oscar® shortlisted documentary 20 FEET FROM STARDOM, will kick off pre-game festivities at the 100th Rose Bowl Game with a special performance of the “Star-Spangled Banner” on January 1, 2014.

This marks the only known time in the game’s 100 year history that the national anthem will be performed by artist(s) rather than a Rose Bowl Game participating team’s band.

Directed by Morgan Neville, 20 FEET FROM STARDOM, spotlights the untold stories of backup singers behind some of the greatest musical legends of the 21st century such as Bruce Springsteen, Stevie Wonder, Mick Jagger and Sting.   Having opened in June, 20 FEET FROM STARDOM is still on ten screens with a box office total to date of $4,777,016.

Clayton lent her voice to a number of major performing artists during the 1960s with her most notable performance being a duet with Mick Jagger on the Rolling Stones’ song, “Gimme Shelter.” She began her career on Bobby Darin’s “Who Can I Count On,” which led to legendary Lou Adler signing her in 1970 and her debut solo album, Gimme Shelter. As an actress, Clayton appeared in the films BLAME IT ON THE NIGHT and MAID TO ORDER. Currently, she is putting the finishing touches on her long-anticipated new CD.

Fischer rose to fame in 1991 with her debut album, So Intense, which produced the Grammy Award–winning hit single, “How Can I Ease the Pain.” Prior to her solo career, she began as a backup singer for a number of famous artists, including Luther Vandross for 22 years and Tina Turner on her Twenty Four Seven Tour, the top-grossing worldwide tour of 2000. Fischer has also toured with the Rolling Stones since 1989. In 2013, she joined the rock band Nine Inch Nails, as a backing vocalist for their Tension 2013 tour.

Hill, Sony Music recording artist, has been praised by Rolling Stone for her “stellar powerhouse vocals.” In addition to penning and performing her own material, Hill has backed artists such as Stevie Wonder, Elton John and the late Michael Jackson. She was also a contestant on season four of “The Voice”. She contributed backing vocals to three tracks on Josh Groban’s latest chart topping album, All That Echoes, and opened for Groban on his Fall 2013 In The Round arena tour. Judith is currently in the studio working on her debut.

Since the early 1960s, Love has done it all – from major motion pictures like the highly successful LETHAL WEAPON series to Broadway hits like Hairspray and Grease and even appearing in numerous television shows. Her background vocals for The Blossoms, The Crystals, The Righteous Brothers, Dionne Warwick, Marvin Gaye and Elvis Presley, set the stage for her emergence as a star in her own right. In 2011, Love received the industry’s highest award when she was inducted in the Rock and Roll Hall of Fame.

RADiUS-TWC is the boutique label from the Weinstein Company (TWC) and the first studio division dedicated to both multi-platform VOD and theatrical distribution. Utilizing both traditional and digital media, RADiUS-TWC brings the highest quality films and other specialty entertainment to a wider audience than ever before. Founded and led by Tom Quinn and Jason Janego, the label continues to develop innovative distribution strategies to make marquee content available to consumers where, when and how they want it. The label’s inaugural slate included such films as BACHELORETTE (the first multi-platform film to hit #1 on iTunes and the only multi-platform release to ever reach #4 for top Cable VOD performers) and Cannes competition entry ONLY GOD FORGIVES directed by Nicolas Winding Refn and starring Ryan Gosling and Kristen Scott Thomas. Recent releases include: Morgan Neville’s audience favorite and the highest grossing documentary of 2013, 20 FEET FROM STARDOM; Rob Epstein and Jeffrey Friedman’s LOVELACE; Zachary Heinzerling’s CUTIE AND THE BOXER (Sundance U.S. Documentary Directing Award), Jacob Kornbluth’s INEQUALITY FOR ALL (Sundance U.S. Documentary Special Jury Award); Jonathan Levine’s long awaited horror debut ALL THE BOYS LOVE MANDY LANE; Stacie Passon’s CONCUSSION and Keanu Reeves’ directorial debut – MAN OF TAI CHI in which he also stars.  In 2014, RADiUS’ slate features (among others): BLUE RUIN (winner of the FIPRESCI International Critics Prize at the Cannes Film Festival), Errol Morris’ THE UNKNOWN KNOWN, Mike Myers’ directorial debut – SUPERMENSCH: THE LEGEND OF SHEP GORDON and Alexandre Aja’s HORNS starring Daniel Radcliffe both of which premiered at this year’s Toronto.

New report conculdes that ‘a la carte’ programming would cost the nation billions of dollars and millions of jobs
“HOURS” In Theaters & Video on Demand today!