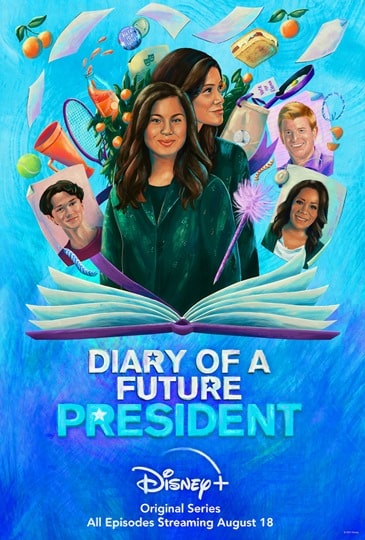 Today, Disney+ revealed the official trailer and key art for season two of the original series “Diary of a Future President,” premiering on Wednesday, August 18. Continuing the origin story of Cuban American and future leader Elena Cañero-Reed as she enters the seventh grade and recounted through excerpts from 13-year-old Elena’s diary, this coming-of-age series follows Elena through the ups and downs of middle school which sets her on the path to becoming the President of the United States.

Katty Huertas, a multidisciplinary Latinx artist born in Columbia and based in Washington DC, designed the illustrated key art.  Known for her work which explores identity and folklore, Huertas created the art in conjunction with the design company mOcean for Disney+.

Tess Romero stars as young Elena Cañero-Reed alongside executive producer Gina Rodriguez (“Jane the Virgin”) who features as grown-up Elena who reappears throughout the season as Elena’s future self and conscience that guides her through middle school and towards the White House.

Keith Heisler and Molly Breeskin are executive producers alongside Peña and Rodriguez. “Diary of a Future President” is produced by CBS Studios in association with I Can and I Will Productions.

Season one of “Diary of a Future President” is currently available on Disney+.  All 10 episodes from season two will start streaming on Wednesday, August 18.

About Disney+
Disney+ is the dedicated streaming home for movies and shows from Disney, Pixar, Marvel, Star Wars, and National Geographic, along with The Simpsons and much more. In select international markets, it also includes the new general entertainment content brand, Star. The flagship direct-to-consumer streaming service from The Walt Disney Company, Disney+ is part of the Disney Media & Entertainment Distribution segment. The service offers commercial-free streaming alongside an ever-growing collection of exclusive originals, including feature-length films, documentaries, live-action and animated series, and short-form content. With unprecedented access to Disney’s long history of incredible film and television entertainment, Disney+ is also the exclusive streaming home for the newest releases from The Walt Disney Studios. Disney+ is available as a standalone streaming service or as part of The Disney Bundle that gives subscribers access to Disney+, Hulu, and ESPN+. For more, visit disneyplus.com, or find the Disney+ app on most mobile and connected TV devices.

About CBS Studios
CBS Studios is one of the industry’s leading suppliers of programming with more than 70 series currently in production across broadcast and cable networks, streaming services and other emerging platforms. The Studio’s expansive portfolio spans a diverse slate of commercially successful and critically acclaimed scripted programming, genre-defining franchises including the ever-growing “Star Trek” universe, award-winning late night and daytime talk shows, and an extensive library of iconic intellectual property.