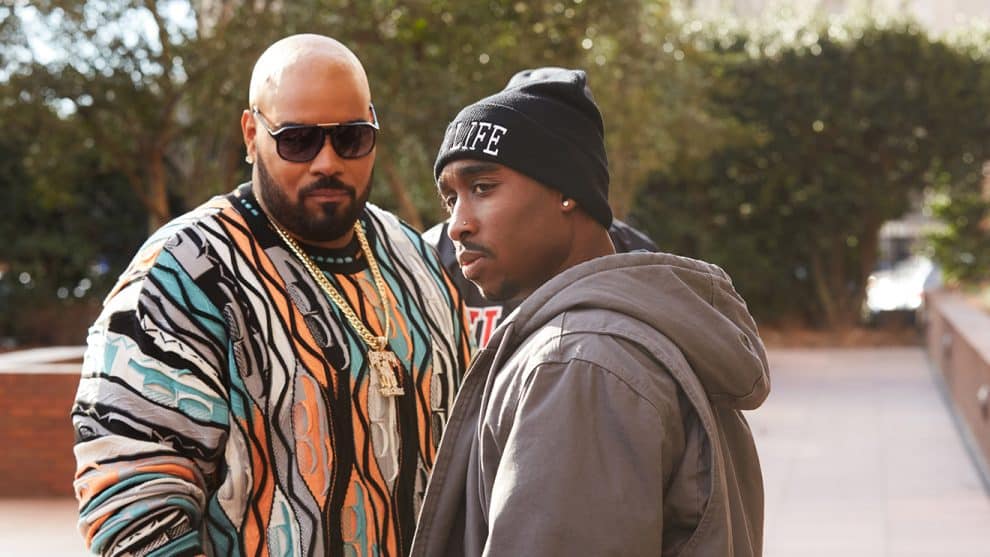 Raised in the Bronx by his outspoken mother Afeni (Danai Gurira), a member of the Black Panther Party, Tupac Shakur (Demetrius Shipp Jr.) confronts police brutality at an early age when FBI agents raid his home on Christmas Eve in search of his activist stepfather. Moving to Maryland in his teens, Tupac attends Baltimore School for the Performing Arts, where he befriends a young Jada Pinkett (Kat Graham). But just as Shakur begins thriving in this creative environment, his now-drug-addicted mother ships him off to live with relatives in Oakland, California.

Discovered at a Bay Area poetry workshop, Tupac joins Digital Underground and tours with eccentric leader Shock G (Chris Clarke) during the group’s “Humpty Dance” heyday. Tupac soon lands a solo deal with Interscope Records and his first movie role, in Juice. Despite the breakout success of his second album “Strictly 4 My N.I.G.G.A.Z…,” Tupac’s personal life becomes entangled in a string of arrests, financial problems, gunfights and sexual assault charges. The problems culminate in November 1994, when Tupac is shot five times in the lobby of New York City’s Quad Recording Studios. The next day he checks himself out of the hospital and goes to court in a wheelchair.

Eventually found guilty of sexual abuse and imprisoned in February 1995, Tupac became the first inmate to score a No. 1 album when “Me Against the World” soars to the top of the charts.

Released after eight months, Tupac teams with volatile Death Row Records mogul Suge Knight (Dominic Santana) and artist-producer Dr. Dre (Harold House Moore) in Los Angeles, where he records the world’s first hip-hop double album, “All Eyez on Me.” But he is also embroiled in a bitter feud with East Coast rival Biggie Smalls (Jamal Woolard), claiming in a song that he slept with the rapper’s wife, Faith Evans (Grace Gibson).

Amid the escalating war, Tupac falls in love with Quincy Jones’ daughter Kidada Jones (Annie Ilonzeh). A few weeks after a now-legendary House of Blues concert in West Hollywood, Tupac travels with Kidada to Las Vegas for a Mike Tyson fight.

Stopped at a red light after the match, with Knight at the wheel, Tupac is shot on September 7, 1996 by unknown assailants and dies six days later. Simultaneously triumphant and tragic, All Eyez on Me tells the untold story of incendiary talent Tupac Shakur, dead at 25, who has sold more than 75 million records worldwide.

All Eyez on Me is directed by Benny Boom (S.W.A.T.: Firefight, Next Day Air).

A riveting blend of music, sex, violence, betrayal, family turmoil, politics, drama and poetry, All Eyez on Me sheds fresh light on Tupac Shakur’s meteoric rise and tragic fall. “I feel like Tupac wrote his own movie,” producer Hutton says. “Tupac wanted to be the light that shined. He wanted to be the person who gave hope. This movie, it’s not just a bunch of partying; it’s not just a bunch of rhetoric and buffoonery. Of course it’s entertainment, but there’s also this undertone of wanting to change society and solve problems. This film is not just for black audiences. It’s for all people in showing that we’re all connected at so many different levels. All Eyez on Me is a journey that walks through all of it.”

The young man who plays Tupac Shakur onscreen hopes All Eyez on Me gives audiences a richer understanding of the gifted rapper. “I want people to get a broader view of who Tupac really was,” Shipp Jr. says. “Everybody loves Pac the ‘thug,’ but there’s so much more. I love the ‘Thug Life’ Pac but I also love the poetic Pac, I love the philosopher Pac and the lover Pac. I want audiences to see all of those aspects in a way they’ve never seen before.”

Synopsis: ALL EYEZ ON ME tells the true and untold story of prolific rapper, actor, poet and activist Tupac Shakur. The film follows Shakur from his early days in New York City to his evolution into being one of the world’s most recognized and influential voices before his untimely death at the age of 25. Against all odds, Shakur’s raw talent, powerful lyrics and revolutionary mind-set propelled him into becoming a cultural icon whose legacy continues to grow long after his passing.