Uber has announced a new car service geared toward bicycle owners in the Netherlands. UberBike, which launches today in Amsterdam, allows users to order rides from cars that have installed bike racks. Uber announced the service on Thursday in a blog post on its Dutch website, saying that the service is designed for those moments when bike owners either don’t want to cycle home, or when their bikes break down on the road. UberBike is priced at the same rate for the company’s UberX car service, with an additional €4 charge. The company previously launched UberBike in São Paulo, Brazil. 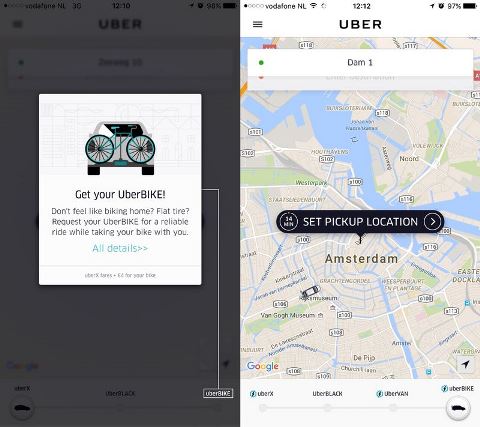 There are an estimated 800,000 bicycles in Amsterdam, and 63 percent of the population say they use their bikes on a daily basis. That makes the city ideal for a service like UberBike, though availability so far appears to be limited; as of early Thursday afternoon, there was only one available car under the UberBike tab.

Today’s launch marks Uber’s latest effort to offer services tailored to a city’s traffic patterns. Earlier this year, the company launched a motorbike service in Bangkok, where many commuters use motorbikes to navigate the city’s notorious traffic jams. (The service was later suspended in Bangkok due to regulatory concerns.) It is not yet clear whether Uber has plans to expand UberBike to other cities.