See the official poster of Pantelion Films’ upcoming release UN PADRE NO TAN PADRE. The film will open in the U.S. on January 27 and includes a stellar cast such as: Jacqueline Bracamontes, Benny Ibarra de Llano, Hector Bonilla, and Sergio Mayer Mori. 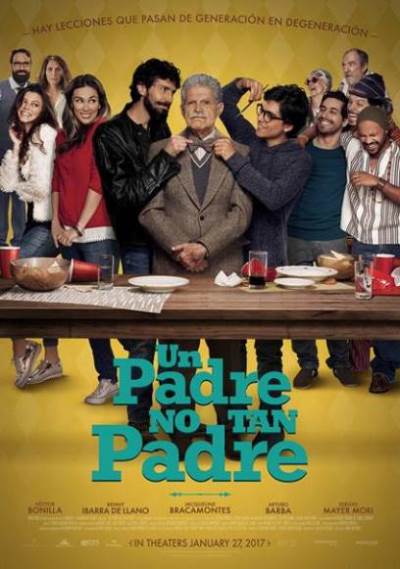 Set in the stately and majestic colonial city of San Miguel de Allende, this quirky comedy starring Héctor Bonilla, Benny Ibarra de Llano, Jacqueline Bracamontes and Sergio Mayer Mori, follows 85-year old Don Servando Villegas (Héctor Bonilla,) an old fashioned Mexican patriarch who gets kicked out of his retirement home for bad behavior. When his estranged son, Francisco (Benny Ibarra de Llano) is forced to take him into the house full of hippies he shares with his girlfriend and young son. “New age” collides with old age as Don Servando and his son Francisco experience a series of conflicts and situations that puts their home’s stability in jeopardy. Un Padre No Tan Padre is a story about family: the one we’re born into and the one we create along the way.

The film will open in Mexico Christmas weekend via Cinépolis Distribución and Pantelion Films/Lionsgate will release on January 2017 in the U.S.