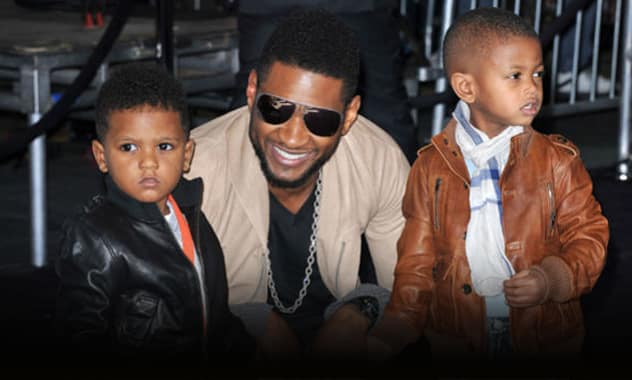 After endless visits to court, Usher has now finally won custody over his two sons and feels the need to get his life back to normal as soon as he can, as he was spotted returning to work yesterday (August 29) for the first time since winning the bitter custody.

The 33-year-old singer was seen on the set of his new music video in sunny Los Angeles, looking rather content as he strolled around the set, showing off those amazing biceps of his in between takes.

Last Friday (August 23) saw Usher gain custody of his two little ones, after a judge made a final ruling on their on-going and emotional custody battle by granting the R&B music star with primary custody of Usher Raymond V, 4 and Naviyd Ely Raymond, 2 – both sons with his ex-wife of three years.

Ex-wife Tameka is still mind-boggled over the final ruling because she had presented her argument that her ex-husband is always on the road due to obligations of his music career, while she has a more stable schedule that she could provide for raising their two young boys.

According to TMZ, the former Mrs. Usher Raymond is interviewing attorneys for an appeal and want to fight the decision. As of now, Tameka still has some custodial right, but the extent of which she will be able to see her children is unknown.

And by the looks of things, Usher can’t wait to get back into the world of music and get some form of routine back into his life. However, we’re pretty sure that he’s more than capable of balancing family and work life together.

We’re glad that the star has got his kids back…good on you, Usher!