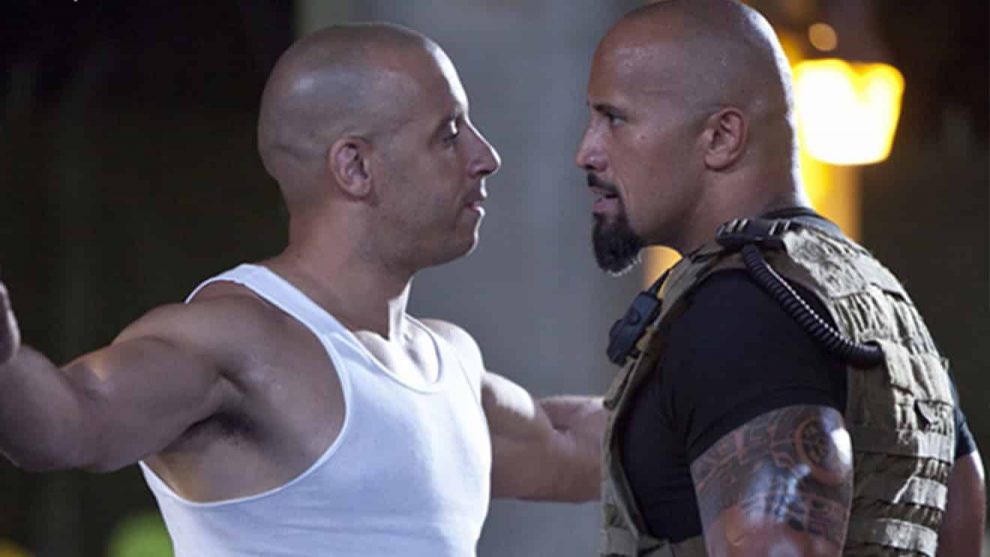 Last August, Universal insisted that The Fate of the Furious stars Dwayne “The Rock” Johnson and Vin Diesel had buried the hatchet after feuding on the set of the eighth film in the Fast and Furious franchise. Fast-forward eight months, and the bad blood continues.

Sources say the two tough-guy actors are being kept from one another as the Fast team continues its press tour in the run-up to the F. Gary Gray-helmed film hitting theaters April 14.

“They’re keeping them separated as much as possible,” says an insider.

That sequestering will be most obvious today when Universal brings footage of the film to CinemaCon in Las Vegas, where Diesel, Charlize Theron, and the rest of the cast will be on hand to promote the eighth installment in the $4 billion franchise. That is minus Johnson, who is already back on the set of Ballers in Miami. But just 12 hours earlier, Johnson was in Las Vegas, participating in Paramount’s Baywatch presentation at CinemaCon. And Monday night, he introduced Sony’s Jumanji at the high-profile exhibition showcase.

Universal downplayed any simmering tensions and said the two actors simply have been on different continents throughout the tour. But sources say that the CinemaCon scheduling could have been easily accommodated.

The beef dates back to the waning days of the 100-day Atlanta shoot when the frequently tardy Diesel arrived late for his final scene with Johnson, prompting Johnson to vent about his co-star on Facebook, where he wrote cryptically: “My female co-stars are always amazing, and I love ’em. My male co-stars however are a different story,” adding that “some” are “chicken shit” and “candy asses.” That led to a heated exchange between Diesel and Johnson in the latter’s trailer. Diesel was publicly fingered as the source of Johnson’s social media outburst, and the studio was left doing damage control for two key players in its mega-franchise. Diesel is the indispensable part of the franchise, having been with it since its first outing in 2001 (two more installments are already in the works). But Johnson is arguably the bigger star, having solidified his status as one of Hollywood’s biggest box-office draws.

At the time, a studio source said, “What happened is over, and no one expects there to be any lingering effects. When it comes time to promote the movie, this will have no bearing.”

But outside of the film’s trailer launch in Times Square in December, the two have kept their distance (both are contractually obligated to appear at the upcoming New York premiere April 8). Still, there’s little chance the bad blood will have any negative effect on the film. If anything, it bolsters the film’s narrative of two adversaries unwilling to back down.